Colombian President Meets with &quot;No&quot; Leaders and Calls for Unity 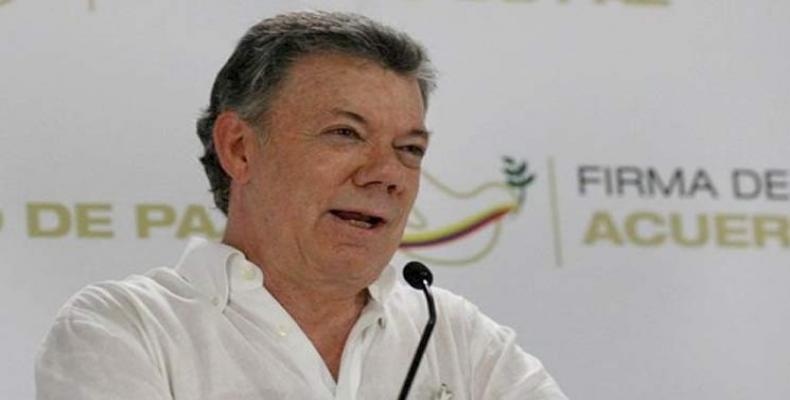 Bogota, October 6 (RHC)-- Colombian President Juan Manuel Santos said that "peace is at hand" after meeting with right-wing former president Alvaro Uribe on Wednesday in a bid to resolve differences over a peace deal with the FARC-EP that was rejected in a surprising vote Sunday, leaving the country in limbo.

The Colombian head of state, speaking to reporters after the meeting, said that talks with "No" forces, including former president Andres Pastrana, would continue and tried to downplay the modifications Uribe and his Democratic Center party seek.

Right-wing leader Alvaro Uribe made a short declaration to the media separately, repeating that the initial peace deal signed with the FARC-EP required "adjustments and corrections."  He said that his issues were related to illegal coca crops, drug micro-trafficking—meaning small-scale traffickers—extortions, and FARC-EP units joining criminal groups -- issues that have been mostly covered in the peace deal, like the substitution of illegal crops for small campesinos or the reinsertion of FARC-EP fighters in the job market.

Uribe did not mention large-scale narco-traffickers and has asked Santos for special treatment for military personnel facing court procedures.  A former president and current senator, Alvaro Uribe opposed Santos' peace talks from the start and led a smear campaign suggesting Santos was “handing the country to the rebels.”  The "No" vote carried the day by less than half a percentage point.

The surprise plebiscite result, which confounded pollsters, has plunged the country into uncertainty over the future of peace in the country.  President Santos once served in Uribe's cabinet as defense minister, but the two had not met since late 2010.

Lead government negotiators Humberto de la Calle and Sergio Jaramillo went back to Havana on Tuesday to confer with the FARC-EP negotiating team.  Santos spoke to U.S. Secretary of State John Kerry, who reaffirmed Washington's support for efforts seeking peace and said special envoy Bernard Aronson will travel to Havana, according to the State Department.