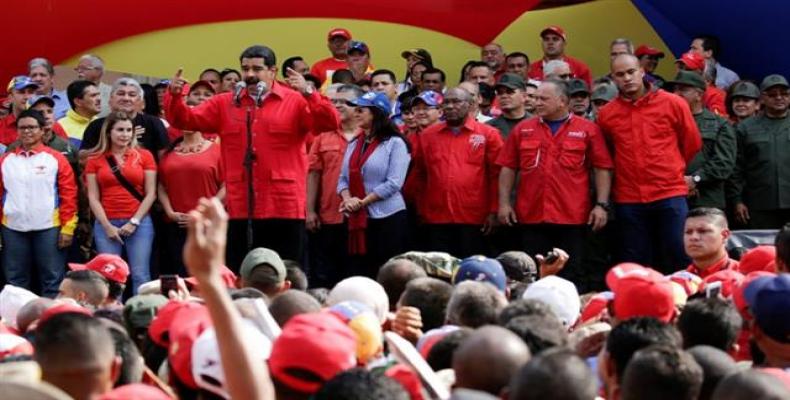 Caracas, October 26 (RHC)-- Venezuelan President Nicolas Maduro has accused the opposition of attempting a “parliamentary coup” by voting to launch an impeachment process against him amid a tense political and economic crisis.

“There has never been a parliamentary coup in Venezuela, and we shall not allow anything like this to happen.  The right-wing here and there should know this,” Maduro said during a massive rally by his supporters outside the presidential palace in the capital, Caracas, on Tuesday.

The opposition-controlled National Assembly had agreed to initiate the impeachment process against Maduro earlier in the day in reaction to blocking a bid to recall Maduro last week.

Minority lawmakers supportive of Maduro in the opposition-led parliament briefly scuffled with the majority camp during the Tuesday debate.  But then most members started singing the national anthem in what was apparently meant to be a show of national unity.

The parliament has summoned Maduro to appear before the National Assembly next week to respond to charges of “abandoning his post” and violating democracy.  However, Maduro dismissed the move as meaningless.  “The National Assembly has been transformed into a bastion of evil and bitterness; it is useless to the interests of our country and our people,” Maduro said during the Tuesday rally.  “It has a single goal: to damage Venezuela.”

“Before leaving office, [U.S. President Barack] Obama wants to damage Venezuela... He is obsessed with destroying Venezuela by whatever means,” he said.  Maduro called for a meeting of the country’s defense committee to discuss recent political developments on Wednesday, when the opposition plans massive anti-government rallies of its own.

Meanwhile, the military has reaffirmed its loyalty to Maduro and warned against any foreign intervention in the country.

The Tuesday vote by the opposition-led legislature is unlikely to have any legal effects as Maduro still controls the other branches of the government, as well as the military and the Supreme Court, which has already declared the National Assembly “illegitimate.”

The political standoff in Venezuela has worsened since the suspension on October 20 of the opposition push to hold a referendum to try to recall Maduro.  Back then, four state courts said the signature-gathering process for the referendum had been “fraudulent,” effectively blocking it.

The Maduro government and the opposition had earlier agreed to hold talks next weekend in an attempt to find a solution to the country’s political crisis.  The talks, being sponsored by the Vatican and a number of South American governments, are set to begin October 30 in the Caribbean island of Margarita.

It was not immediately clear whether the Tuesday vote to launch an impeachment process against Maduro would negatively impact the prospect of talks.