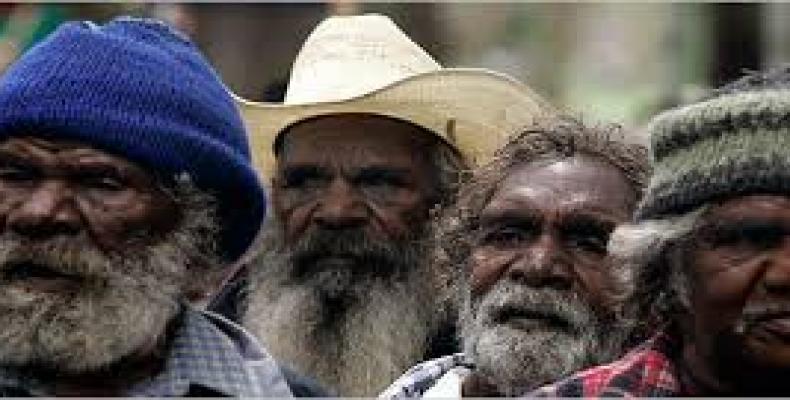 Sydney, November 18 (RHC)-- The wellbeing of Indigenous Australians “has stagnated or worsened” as they continue to face mental health problems, self-harm and rising imprisonment rates. Indigenous policy was also seen to be failing in a number of key areas, according to a government report released in Sydney.

While there have been a number of improvements in Indigenous health, education and economic participation, “areas such as justice and mental health remain concerning, with increases in imprisonment rates and hospitalizations for self-harm,” said the report released by the Australian Productivity Commission.

Using a report card system to measure 52 key indicators, the commissioner said that in the two years since the last report many “outcomes have stagnated or worsened in some areas.”  The report detailed that Incarcerations rates of adult Indigenous Australians increased by 77 percent between 2000 and 2015.  While the Indigenous population only makes up around three percent of the country’s population, Indigenous Australians are disproportionately jailed.

The rate of Indigenous juvenile detention had experienced a decrease, however it still remains a staggering 24 times higher than non-Indigenous youth in Australia.

Hospitalizations for incidents of self-harm increased by 56 percent from 2004-05 to 2014-15 and 27 percent more Indigenous adults reported high levels of psychological distress from 2004-5 to 2014-15.  The report also detailed increases in substance abuse and high rates of suicide, which causes around 10 percent of all Indigenous deaths.

Risky long-term use of alcohol remained the same and between 2002 and 2014-15 there was little change in the 22 percent rates of family and community violence.

Mortality rates for Indigenous children improved significantly from 1998 to 2014 and more Indigenous youth were completing their high school or tertiary education. In the 2014-15 period, 43 percent of Indigenous adults got their main income from employment and overall household incomes were improving.

The commission said that while there are over 1,000 Indigenous policies and programs only 34 were significantly evaluated and that it should serve as a wake-up call for local, state and federal governments.

"The disproportionate levels of income disparity, family and community violence are exposing the next generation to an endless cycle of poverty, exclusion and a sense of hopelessness," said Western Australian Senator Patrick Dodson.