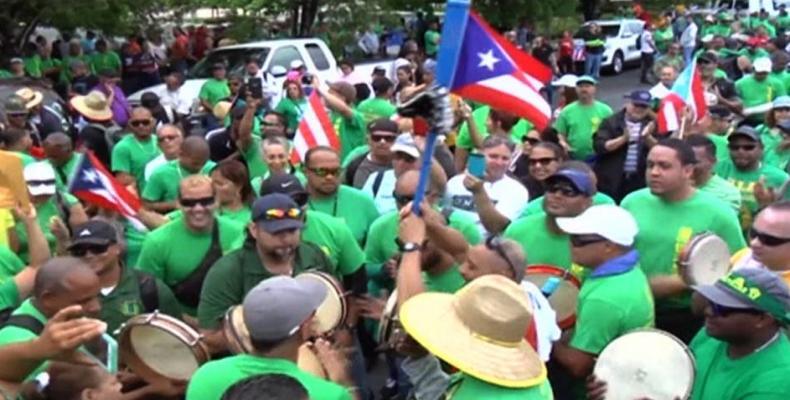 San Juan, May 2 (RHC)-- Thousands of Puerto Rican workers, students and other demonstrators took to the streets in a national strike during the early hours of International Workers’ Day on Monday to protest against the harsh austerity measures pummeling the island and the controversial federal control board managing its economy and crippling debt load.

Groups began demonstrations from different parts of San Juan on Monday, according to local media, ahead of a midnight deadline to reach debt restructuring deals with creditors or face lawsuits from those lenders.

The strike shut down businesses and blocked several streets, including traffic to the Luis Muñoz Marin international airport on the outskirts of the city as well as to the University of Puerto Rico, while dozens of others gathered at the offices of the Department of Labor in the capital’s Hato Rey area to prepare for a march on the financial district.

Demonstrators carried signs with slogans against U.S. colonialism and against the neo-liberal austerity measures targeting the island’s public education, health care, social security and other public services.  Protesters chanted slogans including “Ricky is selling the island!” to criticize Governor Ricardo Rossello, while others marched with images of the Puerto Rico flag in black and white as a symbol of resistance amid crisis on the island.

Marches led by students, feminists, trade unionists and other groups began by congregating at five points in the city and later converged by late morning in the one-mile stretch of San Juan’s Ponce de Leon Avenue, known as the Golden Mile, where the controversial U.S.-appointed fiscal control board steering the island’s economy is headquartered in the heart of the city’s financial center.

The fiscal control board -- set up last year through the contentious PROMESA law that gained bipartisan support in U.S. Congress as a plan to save Puerto Rico from its nearly $73 million debt crisis -- has become a powerful symbol of the island’s colonial relationship with Washington and the sacrificing of basic rights in the name of servicing the island’s unmanageable debt load.

Puerto Rican musician Rene Perez, known as Residente, also joined the marches and addressed the demonstrators.  Wearing a T-shirt promoting free public education, the famed rapper said he was proud to see the massive strike against the debt and in favor of workers’ and students’ rights.

“I’m very certain that is happening is completely unjust,” he said on stage to a large crowd, giving a shout out to students of the University of Puerto Rico, the island’s main public post-secondary education system with a total of 11 campuses and 70,000 students, and criticizing the hundreds of millions of dollars in cuts targeting the institution. “Education is fundamental for all countries’ development.  That is what they are taking away from us and that’s what we have to defend until the end and that’s why we’re here.”

The marches come as months of austerity policies have already had an impact on the cash-strapped island, while health care, pensions, higher education and wages have been some of the keys areas suffering cuts ordered by the corporate experts of the PROMESA board.  Government services are increasingly being privatized to meet creditors’ demands.

Protests against the cuts and the fiscal control board have argued that much of Puerto Rico’s debt is illegitimate.  An initial audit report found that up to $30 billion of Puerto Rico’s more than $70 billion debt load was issued illegally.

A report by the ReFund America Project found that nearly half of the debt the island owes is not borrowed funds, but interest on bonds underwritten by Wall Street firms, who are raking in big profits from predatory lending schemes.

Nearly half of Puerto Rico’s population lives in poverty and child poverty is soaring at 60 percent.  The island faces a Medicaid funding gap of $650 million this year, while unemployment is nearly twice the average of the rate in U.S. states.

Puerto Rico’s ability to deal with its debt crisis has been crippled by the fact that it is a colony of the United States, which bars the island from filing for bankruptcy. Critics argue that the PROMESA bill and fiscal control board -- which can override the local government in making decisions on the economy and debt restructuring -- lays bare Puerto Rico's lack of independence.