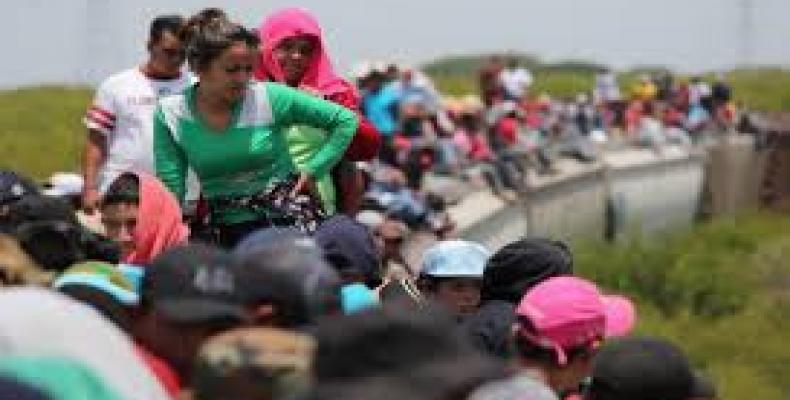 Mexico City, May 4 (RHC)-- A caravan of 200 refugees, fleeing violence and gangs in Central America, has embarked on a journey to the United States – by way of Mexico – in hopes of being granted asylum.

The caravan, which is expected to reach the U.S. next week, was organized by a Mexican-U.S. coalition group.  The journey is meant to raise awareness about the perils and hardships faced by migrants trying to escape violence in Central America.

While riding atop the La Bestia freight trains, the caravan was notably surrounded by about 80 Mexican immigration agents, which is a common occurrence.  Alex Mensing, a paralegal at the University of San Francisco's Immigration and Deportation Defense Law Clinic and one of the organizers, told reporters: "They surround the train in a remote area, they pull everybody off, and in some cases they end up extorting people, detaining them, and sometimes they are collaborating with organized crime."

On April 9, the group consisting of men, women, and children crossed the Suchiate River into Mexico from Tecún Umán, Guatemala.  Two weeks ago, a Mexican-American immigration activist named Hugo Castro – who had gone to meet the caravan – reportedly disappeared and was found five days later suffering from serious injuries.

According to the U.S. and international law, border security agents are obligated to admit asylum seekers, review their cases and evaluate whether they have "credible fear" of returning to their home country if they are not admitted. U.S. Customs and Border Protection (CBP) spokesman Carlos Diaz said to Mother Jones, "CBP has not changed any policies affecting asylum procedures," and that according to the procedures, the officers are required to grant any migrant who "expresses fear of being returned to his/her home country" an interview.

The members of the caravan have set up security and logistical teams to deter criminals from infiltrating the group. Once the caravan arrives in Tijuana, Mexico, the organizers and participants will hold awareness sessions. At these briefings, the organizers will disclose the circumstances that pushed the migrants to leave their homes and head to the United States. "There is a refusal on the parts of the Mexican and the U.S. governments to deal with the Central American exodus as a refugee crisis," Mensing explained to Mother Jones.

On May 7, the refugees are expected to arrive at the U.S. border to formally seek asylum. "I don't know to what extent CBP will push back," Mensing said. "I don't anticipate that they will, but it just depends on how willing the current administration is to crack down directly on Central Americans asserting their rights as asylum seekers. Our plan is that everyone is going to get let in."