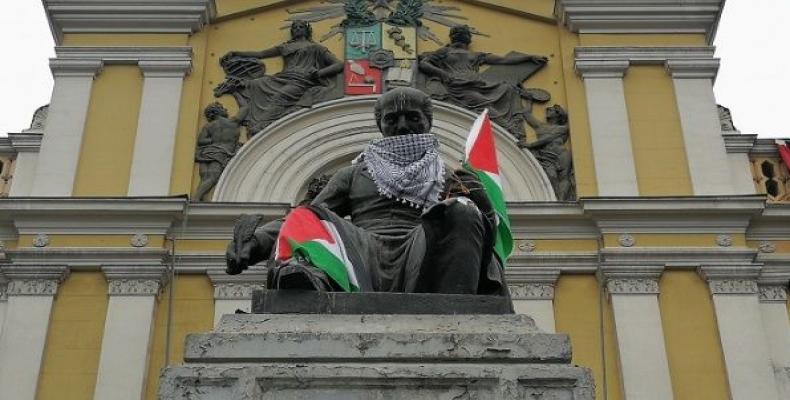 Santiago de Chile, May 16 (RHC)-- In Chile, students of the Department of Philosophy and Humanities of the country’s largest public university, Universidad de Chile, have voted to endorse the Boycott, Divestment and Sanctions (BDS) movement.

As the Israeli army was shooting and killing Palestinian protesters in Gaza and the United States inaugurated their new embassy in the occupied city of Jerusalem, students in Chile voted to sever ties with the University of Tel Aviv and the Hebrew University of Jerusalem.  The departments of Medicine, Social Sciences and Law have also endorsed the campaign for a university “free of Israeli apartheid.”

According to BDS Chile, the two institutions are built on former Palestinian lands and are linked to the development of military technology that enables the systematic oppression of Palestinians and Israelis who oppose Israel’s military occupation.

Ninety percent of the student body cast their votes to adhere to the international BDS movement, a non-violent Palestinian initiative to pressure Israel to end the occupation and recognize Palestinian refugees’ right to return to the lands they were expelled from in 1948, when Israel was created.

In 2017 over three quarters of the Medicine students voted to endorse the academic boycott, and in 2016 an overwhelming majority of students of the departments of Social Science and Law also voted in favor of BDS.

Palestinians in Gaza, mostly refugees, began the Great March of Return on March 30th -- Palestinian Land Day -- to claim their right to return of the over 6 million Palestinian refugees worldwide.   Since then, protesters have gathered every Friday near the border fence with Israel where they have been shot by Israeli snipers despite posing no immediate threat to life.

On Monday, one day before Palestinians commemorated the Nakba, the U.S. unveiled its new embassy in the occupied city of Jerusalem.  The move provoked new border protests in which Israeli occupation forces shot and killed at least 60 Palestinians.

Since the Great March of Return began, Israeli forces have killed over 100 people.  Not one Israeli soldier was injured during these protests.  Illegal use of violence by Israeli forces has been condemned worldwide.