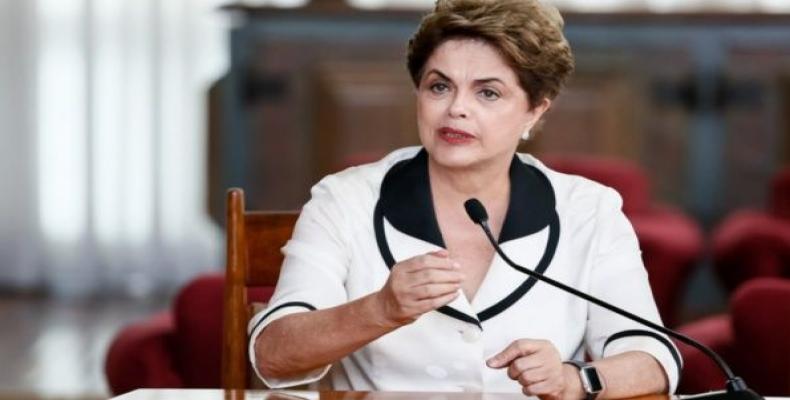 Brasilia, May 26 (RHC)-- As Brazil continues to descend into turmoil as a result of growing calls for the impeachment of President Michel Temer, former President Dilma Rousseff is calling on the Supreme Court to dismiss her impeachment, which has been widely condemned as a farce and parliamentary coup, and reinstate her.

Dilma Rousseff said: “The country is currently experiencing an acute political and institutional crisis on a scale as large as it has ever been seen.”

The latest protests against the Temer administration, installed last year after the removal of Rousseff, come on the heels of the most severe scandal to hit the government yet after a wiretap recording revealed Temer had endorsed bribes to keep a powerful witness quiet in current corruption investigations.

Temer faces investigations for corruption and obstruction of justice after the damning wiretap.  The president has vowed that he will not step down over the scandal, saying in an interview with Folha de Sao Paulo, "I won't resign, oust me if you want."

Rousseff was charged with spending money without congressional approval and using an accounting sleight of hand to make the government's budget appear better than it was ahead of her 2014 reelection — a technique used by many previous presidents that critics of the process have argued is not an impeachable offense as defined in the constitution.

Defense lawyers initially appealed Rousseff’s impeachment to Supreme Court administrator, Teori Zavascki, who passed away January, 2017. Since then, her petition has been transferred to Alexandre de Moraes, former ex Minister of Justice, while they continue to await a ruling.

"Every day there is more evidence that the current president of the Republic, not chosen by anyone, is not fit for the mandate," said Rousseff of her former vice president.

So far, 12 requests have been made for Temer’s impeachment. According to HispanTV, the Brazilian Bar Association (OAB) concluded Thursday there is enough evidence riding against Temer to proceed with the impeachment process.