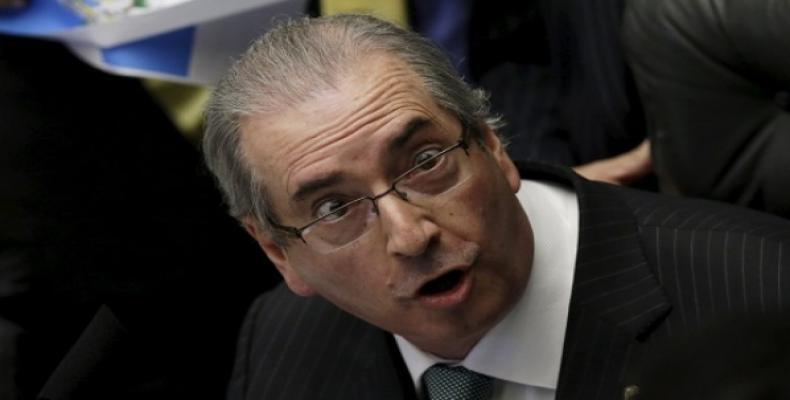 Brasilia, May 5 (RHC-teleSUR)-- Controversial Brazilian politician Eduardo Cunha, who has spearheaded the impeachment process against President Dilma Rousseff, has been suspended from his post by a justice of the country's Supreme Court after a request by the federal attorney general, Brazilian media reported Thursday.

The request to suspend Cunha was approved by Justice Teori Zavascki, who by virtue of accepting the request agreed that the lawmaker had used his post to “constrain and intimidate lawmakers, accuse employees, lawyers and public officials in order to hamper and delay investigations."

The attorney general accused Cunha of using his post to obstruct investigations against him.  As a result, for months he has managed to avoid prosecution over the corruption allegations.

Cunha has been one of the driving forces behind the impeachment efforts against Rousseff.  The incumbent President's supporters say she is being ousted by a coup despite not having been found guilty of any crime.

The removal of Cunha nonetheless represents a symbolic victory for anti-impeachment forces, who felt that he only initiated impeachment proceedings as a retaliatory measure since the Workers' Party opted not to back Cunha.

President Rousseff herself argued that Cunha launched the impeachment process in an attempt to shield himself from charges and called the campaign against her a form of “explicit revenge."