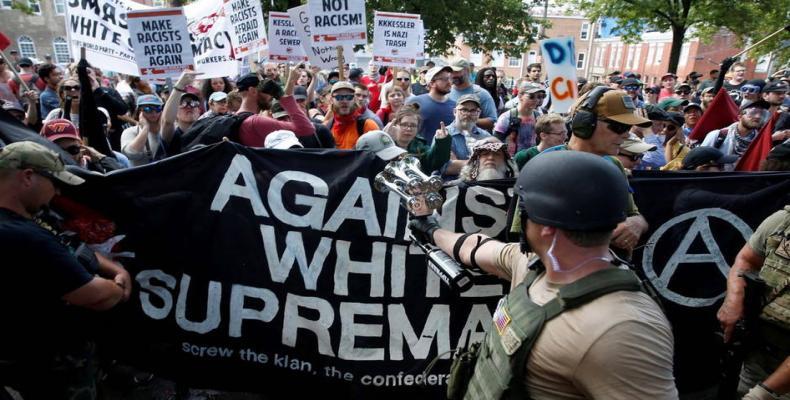 Washington, August 15 (RHC)-- U.S. President Donald Trump is pointing his finger at the “fake news media” after his mild statement failed to condemn a terrorist attack by white supremacists in Charlottesville, Virginia.

The president came under criticism for blasting what he called “many sides” of the Sunday clashes, in which a driver plowed into demonstrators protesting against white supremacists in Charlottesville, killing a young woman and injuring nearly 20 others.

Later, Trump came up with some “additional” remarks to make up for his mild stance, asserting that "racism is evil” by mentioning “the KKK [Ku Klux Klan], neo-Nazis, white supremacists and other hate groups.”

As some news outlets started reporting that Trump is bowing to pressure, the president took to Twitter to put up a classical defense.  Trump wrote: “Made additional remarks on Charlottesville and realize once again that the #Fake News Media will never be satisfied...truly bad people!”

He made the follow-up remarks after the resignation of Merck CEO Kenneth Frazier from his American Manufacturing Council.  "Our country's strength stems from its diversity and the contributions made by men and women of different faiths, races, sexual orientations and political beliefs," Frazier said in a statement that avoided mentioning Trump by name.  "America's leaders must honor our fundamental values by clearly rejecting expressions of hatred, bigotry and group supremacy, which run counter to the American ideal that all people are created equal.”

The president also attacked Frazier on Twitter, claiming that now he has “more time to LOWER RIPOFF DRUG PRICES!”