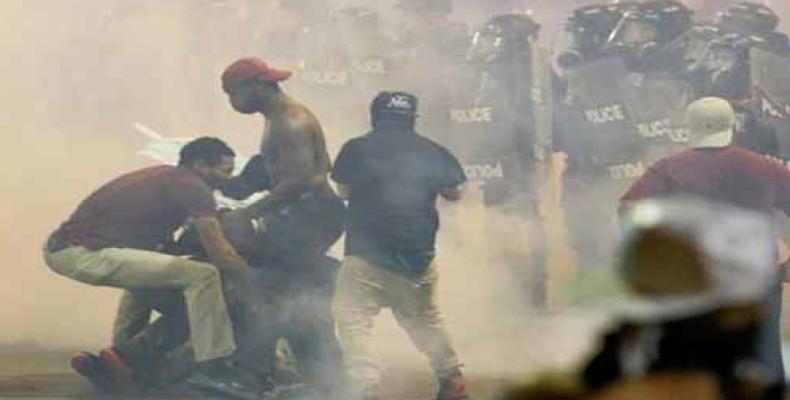 United Nations, September 2 (RHC)-- Three human rights experts in the United Nations have denounced the rising racism and xenophobia in the United States, citing the deadly violence at a white supremacy rally in Charlottesville, Virginia, as the latest example.  In a sharply worded statement, the UN experts said the legacy of slavery is still clearly evident in the U.S. and urged President Donald Trump to properly address the growing hate crimes in the country.

Anastasia Crickley, one of the experts, said the three were “shocked and horrified by the racial hatred of the white supremacists, of the right-wing extremists, and of the neo-Nazi groups” that gathered in Virginia.  She noted the “terrible and unfortunate death” of Heather Heyer, who was killed after a Nazi sympathizer drove his car into a crowd of counter-protesters.

Crickley, the president of the Committee on the Elimination of Racial Discrimination under the UN Human Rights office, said the events were “the latest example of an increase in racial discrimination in the U.S.”  She said: “There is an issue here that needs to be addressed by President Trump and by all of the United States.  The legacy of slavery is still very evident throughout the United States, and indeed in many other countries, in the oppression of people of African descent.”

The other experts joining Crickley in the statement were Sabelo Gumedze, head of the Working Group of Experts on People of African Descent, and Mutuma Ruteere, a rapporteur on contemporary forms of racism, racial discrimination, xenophobia and related intolerance.  In their statement, the UN experts expressed concern about the “proliferation and increasing prominence of organized hate and racist groups” in the United States.  Crickley also criticized Trump for saying there were “very fine people” on both sides in Charlottesville.  “There can be no moral equivalency between racists and Americans standing up to defy hatred and bigotry,” she said.

UK Prime Minister Theresa May expressed a similar statement while criticizing Trump’s comments, saying that there was “no equivalence between those who propound fascist views and those who oppose them.”

Trump has become more isolated than at any point in his presidency over his failure to unequivocally condemn racism and white supremacy.  He has been cast aside by business leaders, condemned by prominent Republican lawmakers, rebuked by foreign officials and the subject of a rare admonishment by two of his predecessors.

The crisis was ignited by Trump's equivocal response to the violence at Charlottesville, initially blaming "many sides" for the trouble, before issuing a fuller condemnation of the violence and white supremacy on Monday last week.  But the very next day, Trump reverted to his initial equivocation while answering reporters at the Trump Tower in New York, saying there was "blame on both sides."  His response has been widely condemned by political leaders across the country as well as internationally.