United Nations Peacekeeping Mission in Haiti Comes to an End 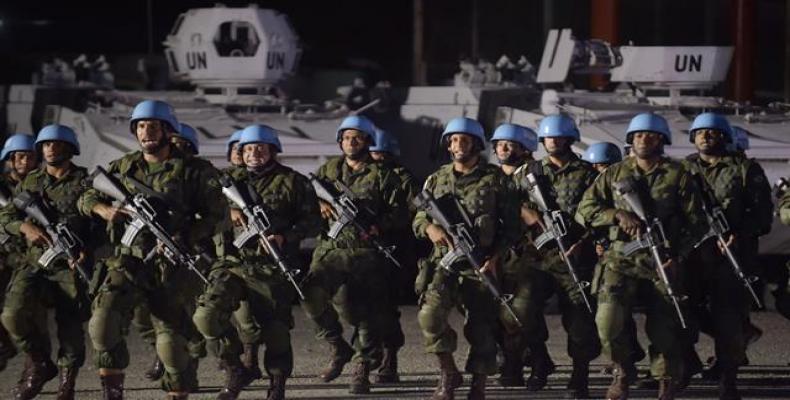 Port-Au-Prince, October 6 (RHC)-- A UN peacekeeping mission in Haiti that has helped maintain order through 13 years of political turmoil and catastrophe has come to an end as the last of the blue-helmeted soldiers from around the world leave despite concerns that the police and justice system are still not adequate to ensure security in the country.

The UN lowered its flag at its headquarters in Port-au-Prince during a ceremony Thursday that was attended by President Jovenel Moise.  After a gradual winding down, there are now about 100 international soldiers in the country and they will leave within the next few days.

The mission will officially end on October 15th.  Afterwards, the UN will start a new mission made up of about 1,300 international civilian police officers, along with 350 civilians who will help the country reform a deeply troubled justice system.  Various agencies and programs of the international body, such as the Food and Agricultural Organization, will also still be working in Haiti.

"It will be a much smaller peacekeeping mission," said Sandra Honore, a diplomat from Trinidad and Tobago who has served since July 2013 as the head of the UN mission in Haiti, known as MINUSTAH, its French acronym.  MINUSTAH began operations in Haiti in 2004, when a violent rebellion swept the country and forced then-president Jean-Bertrand Aristide out of power and into exile.  Its goals included restoring security and rebuilding the shattered political institutions.

In April, the Security Council deemed the country sufficiently stable and voted to wind down the international military presence, which then consisted of about 4,700 troops.  Many Haitians have viewed the multinational peacekeepers as an affront to national sovereignty.  UN troops have also been accused of causing civilian casualties in fierce battles with gangs in Port-au-Prince and of sexually abusing minors.

"The job may not be complete but they have essentially done much of what they were originally designed to do in terms of preventing any kind of armed takeover of the state, in terms of increasing the safety of civilians," said Mark Schneider, a senior adviser with the Center for Strategic and International Studies in Washington.  MINUSTAH, Schneider said, has been key in helping Haiti develop a credible civilian national police from "almost zero" to its current level of about 15,000 officers, which most experts believe is still too small for a country of nearly 11 million.

The police force was intended to replace the army, which was disbanded by Aristide in 1995 because of its repeated role in a series of coups and that the Haitian government is now seeking to reconstitute over international objections.