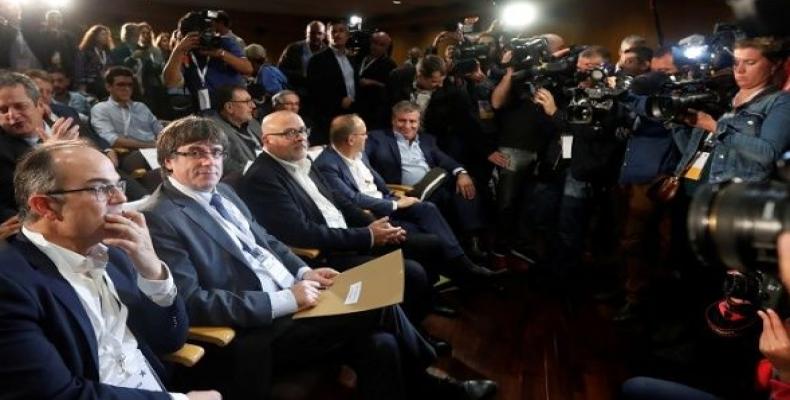 Madrid, October 19 (RHC)-- The Spanish government has threatened to begin legal procedures to implement Article 155 of the Spanish Constitution, dissolving parliament and allowing Madrid to seize control of the regional government of Catalonia, including government assets and public services.

Thursday marked the deadline given by Spanish Prime Minister Mariano Rajoy to the president of the Catalan government Carles Puigdemont to clarify if it had declared independence.  Madrid said Puigdemont has not responded with the precision required by the central government, thus the threat of invoking Article 155 was set for a cabinet meeting Saturday.

Puigdemont, in a recent letter to Rajoy, stated that the suspension of the declaration of independence "is still in force," but warned that this could be reversed.  He said he plans to declare Catalan independence if Madrid continues a pattern of repression and non-negotiation.

"If there is still repression and a lack of dialogue, the parliament may proceed, if it deems it appropriate, to vote on the formal declaration of independence," Puigdemont said in a letter to Rajoy.

In response, government spokesperson Iñigo Mendez de Vigo said in a statement, "the government of Spain will continue with the procedures provided for in Article 155 of the constitution to restore legality in the self-government of Catalonia."

The Catalan president reiterated that Rajoy has not answered his proposal for a meeting and that Madrid has not heeded his request to stop the "judicial repression."  Puigdemont wrote in his letter that political violence has increased since his pleas to the government.

In his letter, the Catalan leader said that Catalonia is committed to dialogue and negotiation but added that "despite all these efforts and our willingness to dialogue," the "only response" from Madrid is "the suspension of autonomy."  For Puigdemont, this attitude "indicates that one is not aware of the problem and one does not want to talk."

Puigdemont wrote that the suspension of the declaration of independence was a gesture meant to open up dialogue.  The Catalan leader stressed the results of the referendum -- where over 90 percent of Catalans voted for independence -- noting that it had more popular support than the U.K.’s Brexit referendum despite police repression of voters on election day.