Catalans Out on Strike After Spain Annuls Independence 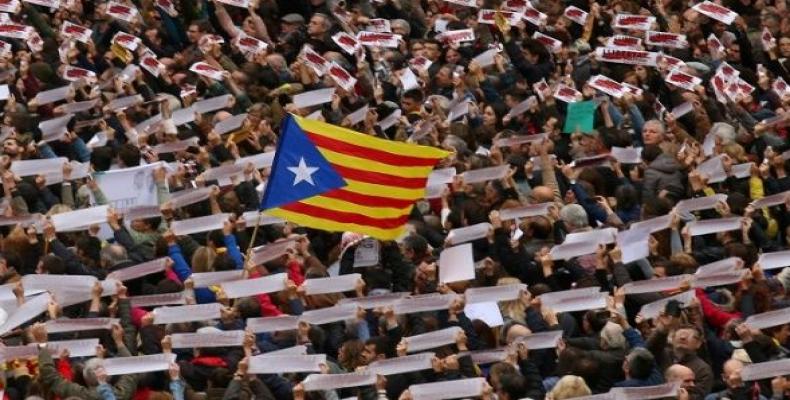 Barcelona, November 9 (RHC)-- Strikes and protests are taking place throughout Catalonia to demand the region’s independence and the release of several former Catalan authorities and independence activists who protesters describe as political prisoners.  Eight former Catalan cabinet members, an independence referendum leader and a former member of the now-dissolved Catalan Parliament are being imprisoned indefinitely by a Spanish court for sedition against the central government for their role in the independence bid.

Amid the strikes, the Spanish Congress declared the Catalan Parliament’s independence vote from October 27th null and void, underlining that several former cabinet members are being fined thousands of euros per day for participating in the independence movement.

El Mundo reported that 54 roads are blocked, causing “massive traffic jams” particularly on the highways that lead in and out of Barcelona.  In the city of Girona, where former Catalan President Carles Puigdemont once ran for mayor, citizens managed to block the running of a transnational train that transports between Spain and France.  Protesters there chanted: “Freedom, Freedom.”

Most teachers and students are not at educational centers in Catalonia yesterday as many public schools and universities are closed.  The Independent reported that the National Guard and the Catalan regional police force physically removed several strikers from roadways, but that overall, today’s protests are "peaceful."  Barcelona’s James Square is filled with thousands of protesters waving Catalan flags chanting, “Puigdemont is our president,” “freedom” and “independence.”

At the same time, most shops, factories and businesses are up and running with strike turnout being less than previous pro-independence protests. teleSUR correspondent Joan Ortiz reported via Twitter that the strike hasn’t invoked a strong following, but "has a lot of people talking.”

"People weren’t on strike at public transportation centers, hotel and restaurants, business or industrial sectors,” it added, claiming that protesters were acting “coercively” by cutting off highways.

Puigdemont and four former Catalan cabinet members remain in Belgium awaiting a Brussels court decision of whether to extradite the five detained back to Spain, where they are accused of sedition, rebellion and embezzlement.

Belgian Prime Minister Charles Michel said that he would not intervene in the Belgian court’s decision regarding Puigdemont, but encouraged dialogue between pro-independence activists and the Spanish government.  "The most important message, which is my strong conviction, is dialogue, dialogue, political dialogue."