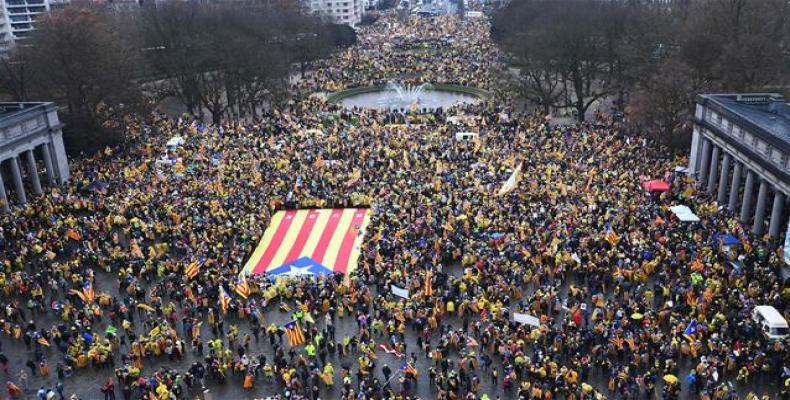 Brussels, December 8 (RHC)-- The yellow and red striped Catalan flags waved brightly in the grey sky as almost 50,000 people filled the streets of Brussels protesting in support of former Catalan president Carles Puigdemont and the region's independence from Spain.  Thousands of demonstrators marched and chanted, “Europe Wake Up” and "Puigdemont, President" with the former Catalan leader walking among the crowd.

The protesters largely exceeded organizers’ expectations who estimated a gathering of around 20,000 for the day’s events.  However, support came from all over Europe as protesters arrived after 12-hour treks across France and Spain.  "We cannot abandon our president, who is in exile here," protester Antoni Llenas told AFP.  "We are here to continue the struggle for our independence and to ask for the freedom of our political prisoners."

Although there have been small pockets of protests by pro-Madrid demonstrators, this marked the first, and by far the largest, demonstration in Brussels for Catalan independence.  EU banners were on display with the words, “Shame on you,” scrolled across the emblematic crest, while Flander’s yellow lion of the Flemish Region in Belgium flew proudly in solidarity with their sister province, Catalonia, both united in their push for independence.

The protesters paraded in front of the European Commission’s headquarters, past the European Council, and finally the European Parliament, clearly showing their complete disapproval of the EU’s support to the Spanish government regarding Catalan independence.  Puigdemont and four ex-ministers left Spain for Belgium in November following a series of criminal charges by the Spanish authorities leveled at the independence leaders, namely sedition, rebellion, and misappropriation of state funds.  "Brussels is a kind of a loudspeaker for us,” said Gloria Cot, a protester from Barcelona.  "It is a loudspeaker so that people can know that we really don't have a 100 percent democracy in Spain and that Catalonia has always been subjected to problems with Spain."

Earlier this week, the European arrest warrant and extradition request were lifted by a Spanish judge who stated the legal action was not applicable to Puigdemont’s case.  The former Catalan president plans to remain in Belgium until after the regional elections called by the central government on December 21st.