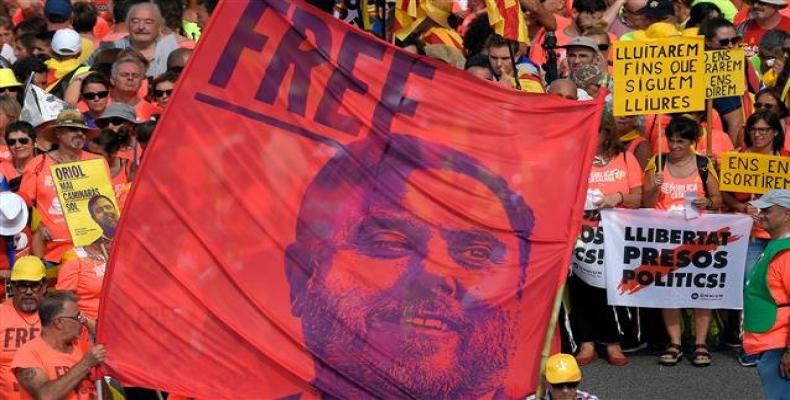 Madrid, October 26 (RHC)-- Spain’s Supreme Court has ordered the trial of 18 former Catalan leaders over their role in holding and supporting a controversial referendum on independence last year.

In a statement issued on Thursday, the court said that nine of the leaders, including Catalonia's ex-vice president Oriol Junqueras, who are currently behind bars, should be tried for alleged “rebellion,” which could bring a prison sentence of up to 25 years to the defendants if they are found guilty.

The other nine, who have been released on bail or gone into self-imposed exile, face accusations ranging from rebellion to misuse of public funds, it added.

It is expected that the country’s public prosecutor will formalize charges against the defendants within the next five days. A trial would likely commence next year.

Catalan separatists decide to re-nominate self-professed, fugitive leader Carles Puigdemont as the head of their regional government.
Carles Puigdemont, Catalonia's former president, who is in self-imposed exile in Belgium, is not part of the group expected to be tried since Spain does not allow trials in absentia.

He played a significant role in a separatist bid that culminated with the region’s declaration of independence on October 27 last year following a banned secession plebiscite that was marred by violence.

Catalonia, one of Spain’s wealthiest and most productive regions, is now theoretically under the direct control of the Spanish central government in Madrid. Pro-independence parties won a slim majority after a December 2017 election called by the Spanish government. However, they have since been locked in drawn-out negotiations on forming a government.

Following the controversial referendum on independence, the Catalan government claimed that 90 percent voted for secession from Spain, but turnout was less than 50 percent. The plebiscite also marked the northeastern region’s second vote on independence in three years.
According to Spain’s 1978 constitution, the European country is indivisible and grants the national government exclusive authority to hold referendums.

Polls show Catalans are evenly divided on the question of independence, with older people mostly opposing independence while the young generation mostly supports cessation from Spain. However, the overwhelming majority back a legally binding vote to settle the issue.