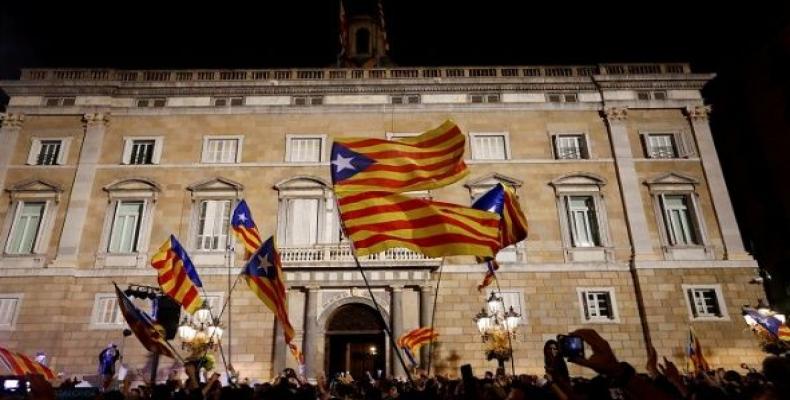 Barcelona, October 30 (RHC)-- The city council of Barcelona has issued a declaration denouncing Spanish King Felipe VI’s meddling in the Catalan affairs, reaffirmed its commitment with the Republican values, and called for “the abolition of an outdated and anti-democratic institution such as monarchy.”

The constitutional declaration was issued in reference to Felipe VI’s repressive actions during the October 1, 2017, referendum on the Catalan independence from Spain.  It was proposed by the Popular Unity Candidacy (CUP) and had the support of Barcelona’s mayor Ada Colau from the Barcelona in Common (BComu) party, as well as the European Catalan Democratic Party (PDeCAT) and the Republic Left of Catalonia (ERC), and independent councilors, 29 votes to 41.

These kind of declarations have a symbolic value only, are not debated and are only read outloud during the session.  But not everyone was happy with the declaration and many demanded their names to be put in the list to speak about it.  Alberto Fernandez Diaz, from the Peoples’ Party (PP), said he regretted “the declarations have come out with the vote of Barcelona’s mayor” and added they were showing “disdain to the crown and the unity of Spain.”

Carmen Andres, from the Socialists’ Party of Barcelona, also made it very clear that her party didn’t agree with it and said the monarchy was part of the “legitimate and democratic institutions” of Spain.

Members of the Citizens (Cs)  political party left the hall as they felt the Parlament didn’t have the right “to demand freedom of no one who is at jail,” in reference of those that were arrested during the 2017 repressive actions of the police.  Others, such as Gerardo Pisarello, also from BComu, said the monarchy “turned into an obstacle for the democratic progress we need in the 21 century.”

The declaration also rejected the threats based on the Article 155 of the Constitution of Spain, which establishes that the autonomy of a community can be suspended if the central government thinks it’s in the interests of the nation, a law that could be extended to outlaw inconvenient political parties in Catalonia.