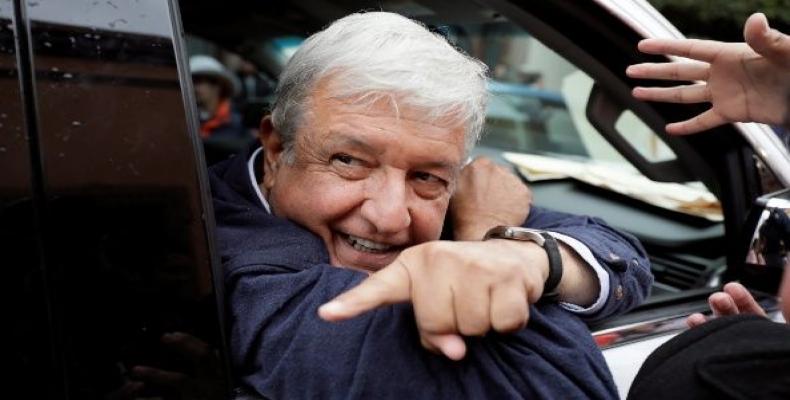 Mexico City, Feb 13 (RHC)-- Mexican political parties have held closing ceremonies for their pre-campaigns ahead of the country's general elections in June.

Andres Manuel Lopez Obrador, the poll-leading candidate for the “Together We Will Make History” coalition, addressed at least 20,000 people in Guadalajara, the capital city of Jalisco.  His coalition includes the National Regeneration Movement (Morena), the party he founded in 2014, the Social Encounter Party, PES, and the Workers' Party, PT.  “I won't betray the people,” said Lopez Obrador. “I have three guiding principles: not to lie, not to rob, not to betray the people.”

His main proposal is to end corruption, something he has promised since his first campaign in 2006.  “We will end corruption in Mexico like sweeping stairs, from the top to the bottom,” he said during his closing event.  Numerous polls give him a wide popularity margin.

The second most popular candidate is Ricardo Anaya, the former president of the right-wing National Action Party, or PAN.  After an internal dispute with Margarita Zavala, wife of former President Felipe Calderon, Anaya nominated himself as internal candidate for his party, which caused internal divisions.

In his closing event in Coatzacoalcos, Veracruz, Anaya also pronounced himself against corruption and said he was in a “technical tie” with Lopez Obrador in the preliminary polls. His supporting party coalition, “To the Front for Mexico,” includes his National Action Party and his rival's former Democratic Revolution Party, which nominated Lopez Obrador during the 2006 and 2012 elections.  He has promised a “Universal Basic Income” for the unemployed.

Jose Antonio Meade, the proposed candidate by the Institutional Revolutionary Party, PRI, closed his campaigning in Tlalnepantla, in the State of Mexico, a notorious PRI stronghold.  He is being presented as a “neutral” technocrat candidate, as he doesn't belong to the PRI and has worked for other parties.  He was nominated for the “All For Mexico” coalition, which includes the PRI and two smaller parties considered its satellite parties: the New Alliance and the Green Party.

Meade is the third most popular candidate and has also promised to fight corruption.  In the current administration, seven state governors from the PRI have been accused and charged of corruption, money laundering, embezzlement and other crimes. Some of them were freed, others are in prison, and one, the former governor of Chihuahua Cesar Duarte, is currently fugitive.

The pre-campaign period officially began on December 14, 2017.  From that time onward, parties and coalitions were allotted 30 minutes daily for radio and TV propaganda.  They can't call for a vote or promote their candidates as actual presidential candidates, given that they are still supposed to be “precandidates.”