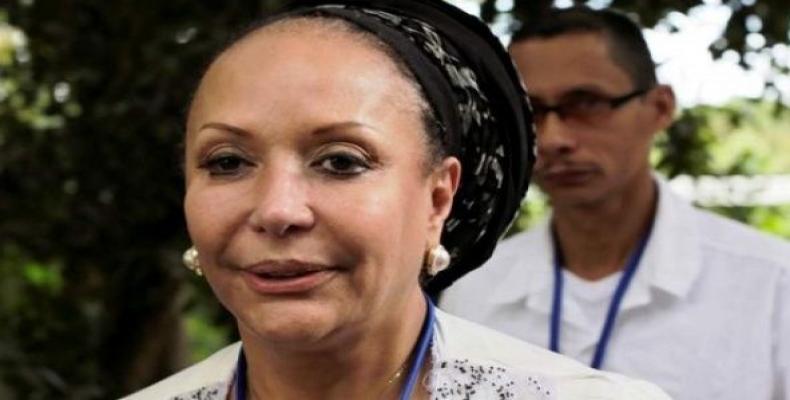 Bogota, June 13 (RHC)-- Colombia's most prominent human rights activist, former Senator Piedad Cordoba, has officially announced her plans to run for president in the 2018 election and began the process of collecting signatures to launch her campaign.

"I announce to the country that I am going to be a candidate and I will be president of Colombia in 2018," Cordoba wrote on her official Twitter account to 711,000 followers.

In an interview with El Colombiano, the 61-year-old lawyer said she will focus on battling social inequality and fighting corruption.

"The majority of citizens no longer feel represented by the old politics that neither talks about their problems nor resolves them," Cordoba continued on Twitter.  "It is time to team up with society.  The elections of 2018 will endorse a demand for change."

The Afro-Colombian politician, lawyer and long-time peace activist is a renowned figure in the country and works with human rights associations in the South American nation and throughout the region.

"I never left politics.  Despite all the adversities I had to deal with -- the illegitimate and illegal inability (to hold public office) they had to revoke, kidnapping, exile, threats to me and my family -- I was always doing politics together with Colombians," Cordoba said to El Tiempo.

It's been seven years since she was dismissed as a senator by the Attorney General's Office, for alleged "collaboration with the FARC."

Despite this, the former senator was a key figure in the peace talks and historic deal reached last year by the FARC guerrilla forces and the government of President Juan Manuel Santos.

When asked whether she will be a candidate for the FARC, which is currently demobilizing in preparation to become a political party that will participate in the 2018 elections, she replied: "I do not have the slightest idea about the decisions that the FARC will take in the Congress or the formation of its party, and I imagine that it is going to emerge either to support a candidate or their own candidate."

Fifteen other politicians, including the current Vice President German Vargas Lleras, have expressed their hopes of running for president.