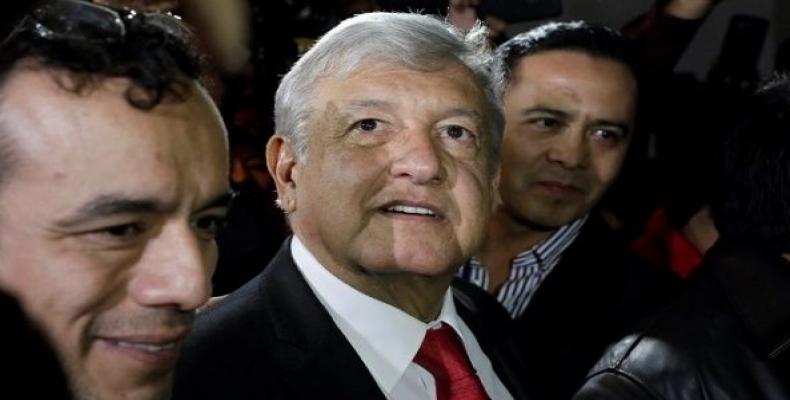 Mexico City, Feb 20 (RHC)-- Lead Mexican presidential candidate Andres Manuel Lopez Obrador (AMLO) told crowds during his nomination speech, that if Donald Trump "insists on building the wall, we're going to turn to the United Nations to defend the rights of Mexicans."  As Mexico formally announced its presidential candidates, Andres Manuel Lopez Obrador still leads all of his major opponents in the polls.

Lopez Obrador, who ran for president in 2006 and 2012 and then formed his own party, National Regeneration Movement (Morena), is stumping to fight poverty, violence, and corruption in Mexico.  Reported homicides in Mexico have skyrocketed under current PRI (Institutional Revolutionary Party) administration under Enrique Peña Nieto.  Officially, 2017 ended with 29,168 homicides, a 20 year high.

"We can't let ourselves get used to horror," the lead candidate and Morena representative told Mexico City crowds at his party's convention.  "Order isn’t obtained by force," Lopez Obrador told the crowd, referring to the de facto and legal militarization of Mexico’s police forces.  "Order comes through justice.  With an obsessive perseverance, I will end corruption," the Morena candidate told his supporters.

Jose Antonio Meade was announced the candidate of the ruling PRI at a stadium also in Mexico City.  Similarly, he’s vowing to end corruption, which has wracked his political party and this administration, for which Meade served as Secretary of Finance and Public Credit until December.

"They're asking us to take away guns, money, and property from criminals and those who are corrupt, and that's exactly what we're going to do," the PRI nominee promised the crowds, which included members of national labor unions.  Meade, who has recently slipped in the polls is trailing about 20 points behind AMLO.

In the middle of the two -- in terms of polls and political ideology -- is the center-left coalition candidate, Ricardo Anaya.  Anaya has the support of about 25 percent of the electorate and his coalition, For Mexico in Front (FMF), is proposing a universal basic income program to fight poverty. He’s representing National Action Party (PAN) on the ballots, a traditionally conservative party which joined forces with the center-left Party of the Democratic Revolution (PRD) and the Citizens Movement in December to form FMF.

These candidates will be joined by independents, Jaime Rodriguez Calderon and Maria de Jesus Patricio, Mexico’s first indigenous woman to run for president.  While candidates have already been on the road vying for the presidential bid, they still have six weeks before formal campaigning can take place for the July 1 polls.