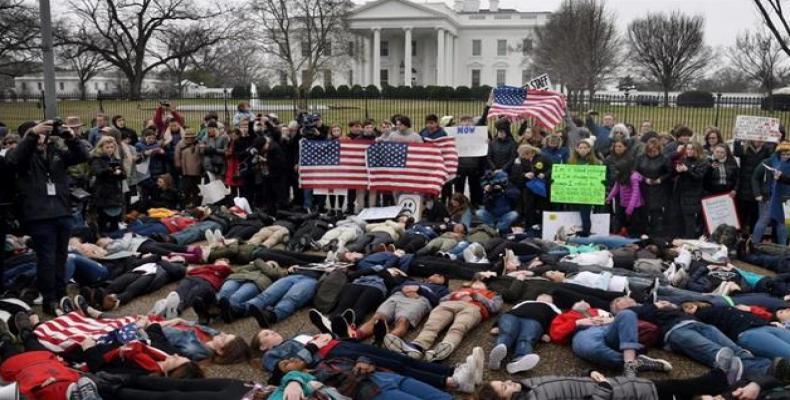 Washington, Feb 20 (RHC)-- Students in the United States are protesting President Donald Trump's gun policy in the backdrop of a deadly shooting at a school in Parkland, Florida.  On Monday, dozens of teenagers staged a lie-in protest in front of the White House to decry lack of gun control in the United States.

The students lay on their backs on the sidewalk at White House gates while some others stood holding signs that read: "Am I next?"  The demonstrators chanted slogans against the National Rifle Association (NRA) as well.

"Hey, hey NRA, how many kids did you kill today!" They shouted, "We call bulls--t! We call bulls--t!"  They also pointed to the U.S. Congress' inaction in tackling the country's gun violence.  "Congress is complicit! Congress is Complicit," they shouted. "No more dead kids!"

The lie-in protest came after 17 students and school staff were killed and 16 more were injured at Marjory Stoneman Douglas High School on Wednesday.

The 19-year-old shooter, identified as Nikolas Cruz, fired some 100 shots by his AR-15 rifle.

Monday's protest was organized by a group called Teens for Gun Reform over Facebook.  "We must stand together in solidarity as the younger generations, and show our legislators that we demand reform in order to feel safer in our classrooms," the group declared on Facebook.