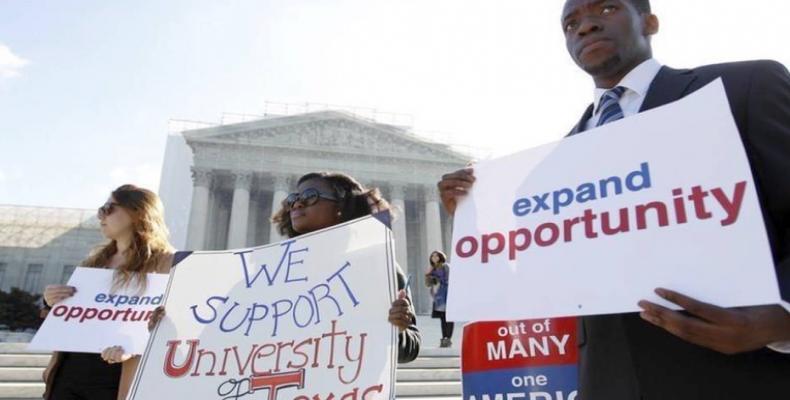 Washington, July 5 (RHC)-- The Donald Trump White House has rescinded an extensive set of guidelines put in place under President Barack Obama that had called on colleges and universities to consider race as a way of promoting diversity.

U.S. Attorney General Jeff Sessions said the 24 documents, many of which gave advice to schools on how to deal with Supreme Court decisions on race and admissions, “were unnecessary, outdated, inconsistent with existing law or otherwise improper.”

It has the effect of bringing the federal government’s position on affirmative action close to that of the George W. Bush administration which held that race could be considered only if a university had no other way of achieving a diverse student class.

The U.S. Supreme Court has ruled over a series of cases that universities may use affirmative action to help minority applicants get into college.  Conservatives have argued such programs can hurt whites and Asian-Americans.

The rules under Obama, a Democrat, were issued by the Department of Justice and the Department of Education.  They tell universities and colleges that it is acceptable to use race as a tool to achieve diversity.  For example, one of the guidances, “Question and Answers About Fisher v. University of Texas at Austin,” poses the question “Did the Supreme Court change what colleges and universities must do to narrowly tailor their admissions programs to meet the compelling interest in diversity?”  It answers, “No.”

The Republican Trump administration’s move is being viewed by Democrats and liberals as a way to weaken affirmative action.

“The Administration’s rollback of vital affirmative action guidance offends our nation’s values and promise of opportunity for all,” said Nancy Pelosi, the U.S. House of Representatives’ Democratic leader.  The Justice Department under President Donald Trump has been investigating a complaint by more than 60 Asian-American organizations that say Harvard University’s policies are discriminatory because they limit the acceptance of Asian-Americans.

The department joined Students for Fair Admissions, the group behind the case, which has urged the disclosure of “powerful” evidence showing that Cambridge, Massachusetts-based Harvard is violating Title VI of the landmark 1964 Civil Rights Act.  Title VI prohibits discrimination on the basis of race, color, and national origin in programs and activities receiving federal financial assistance.

Harvard says its admissions policies comply with US laws and that it has worked to boost financial aid to ensure economic, as well as racial, diversity in its classes.