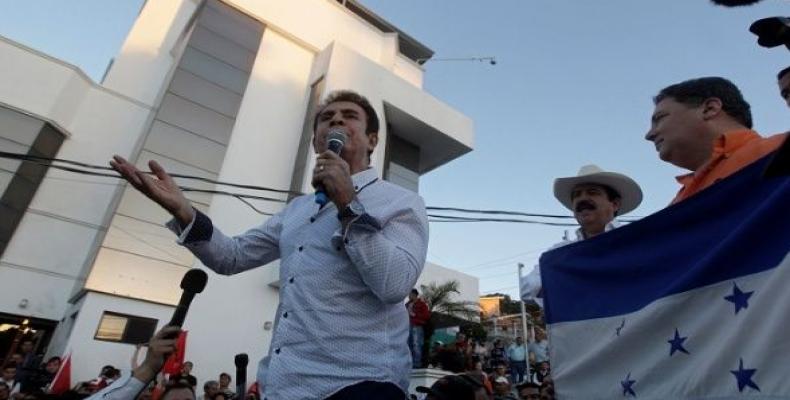 Tegucigalpa, Feb 24 (RHC)-- Salvador Nasralla, the former Honduran presidential candidate for the Opposition Alliance against the Dictatorship, has slammed as inadequate the report prepared by a United Nations mission that visited the country earlier this month regarding dialogue between the government and opposition parties, while repeating his call for holding new general elections in Honduras.

Nasralla said the report by the exploratory mission of the Department of Political Affairs of the United Nations does not recognize the problem and accused it of diverting attention from the real cause of the conflict, which according to him is that "practically nobody" accepts Juan Orlando Hernandez as the country’s president.

"Honduras’ problem is the people who are not accepting the electoral fraud, if that problem is not recognized, they will never find a way out, they will just be giving us delaying tactics," he said during a press conference referring to the U.N. experts who visited the country for few days earlier this month.

"What are they going to do?  Are they going to put me as the one who legitimately won the elections or are we going to a new election process? That would be the right thing to do," said the opposition leader, who also considered it necessary to repeat the parliamentary elections.

Also Nasralla reiterated that his party would only accept a dialogue under international mediation that has binding decisions. His comments came hours after the U.N. mission said Hondurans themselves should “seek the facilitating mediator” to resolve the post-elections crisis.

"In light of the current context, the mission recommends a series of actions that could establish the bases for dialogue, help reduce tensions and generate confidence in an eventual process," said the vague report that was presented to the U.N. Secretary General Antonio Guterres.

"The mission recommends that the mediating facilitator be appointed with the approval of the conveners of the dialogue" and that their name must be "approved by the main political actors."  The report did acknowledge the “high levels of post-electoral violence” and “the tendency to militarize public security” which it argued were reasons of “distrust towards the government.”

The crisis erupted after the electoral authorities awarded the Nov. 26 presidential victory to Hernandez, who ran for a controversial reelection, after the first vote counts gave an advantage to the candidate of the Opposition Alliance Nasralla.

The aftermath of the election saw large opposition demonstrations which was confronted by a brutal government crackdown that left more than 30 dead and hundreds of prisoners, according to human rights organizations.