Dispute between U.S. and Canada escalates as Trudeau is censured 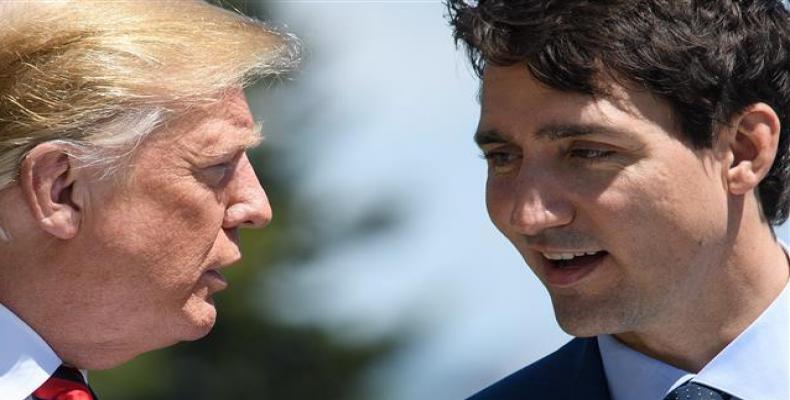 Ottawa, June 11 (RHC)-- The row between the U.S. and Canada has escalated in the wake of the recent G-7 summit.  Donald Trump departed early from Quebec, where the G-7 leaders were gathering, on Saturday, saying a more urgent priority for him was an upcoming face-to-face meeting with North Korea's Kim Jong-un in Singapore.

He tweeted again later about the G-7 from Air Force One, questioning the text of the final statement of the summit of the wealthy nations and saying that the U.S. would not sign it.  The move led to back and forth jabbing by officials from the U.S. and Canada.

Trade adviser Peter Navarro also caught the media attention by appearing on CNN, where he attacked the Canadian premier.  "There is a special place in hell for any leader that engages in bad faith diplomacy with President Donald J Trump and then tries to stab him in the back on the way out the door and that's what bad-faith Justin Trudeau did with that stunt press conference, that's what weak, dishonest Justin Trudeau did," Navarro said.

Canadian Foreign Minister Chrystia Freeland responded to the assault by saying that such attacks are not helpful.  "Canada does not conduct its diplomacy through ad hominem attacks -- and we refrain particularly from ad hominem attacks when it comes from a close ally," Freeland told reporters in Quebec City.

European allies of Canada, meanwhile, are coming out in defense of the Group of Seven communique as well as the Canadian Prime minister.