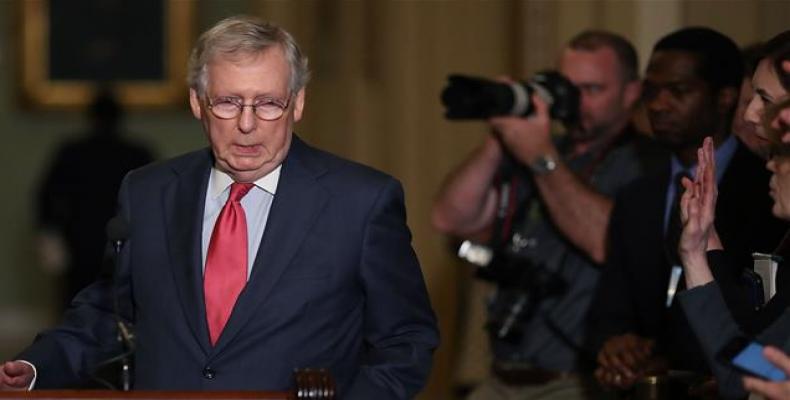 Washington, June 13 (RHC)-- U.S. Senate Majority Leader Mitch McConnell has threatened North Korea with the policy of maximum pressure if it does not stick to the outcome of the historic summit between President Donald Trump and North Korean leader Kim Jong-un.

McConnell, speaking during the opening session of the Senate on Tuesday, said he supported the goals contained in the Trump-Kim's joint statement on denuclearization but added that Washington must be prepared to respond if Pyongyang failed to comply.

"If North Korea does not prove willing to follow through, we and our allies must be prepared to restore the policy of maximum pressure," he said.  The Senate majority leader added that he was supportive of the White House position on resolving the North Korea problem but emphasized the importance of attaining the end goal.  "The goal of the United States is complete, verifiable and irreversible denuclearization of the Korean Peninsula," McConnell said.

Earlier in the day, Trump and the North Korean leader signed a joint statement at the end of their historic meeting in Singapore, promising a new relationship between the nations and pledging to work toward complete denuclearization of the Korean Peninsula.

Kim "reaffirmed his firm and unwavering commitment to complete denuclearization of the Korean Peninsula" and Trump, in exchange, agreed to "provide security guarantees" to North Korea.

In a matter of hours after the landmark summit, Republican and Democratic senators started criticizing Trump as well as threatening North Korea over the potential deal.  Republican Senator John Barrasso said all political, economic, military and diplomatic options must continue to be on the table until work toward full denuclearization of the Peninsula was completed.

Robert Menendez, a democratic senator from New Jersey, blasted Trump for meeting with the North Korean leader, saying that the U.S. president seemed to have viewed the summit as "an honor."

Senate Minority Leader Chuck Schumer said the meeting was "a welcome improvement" to "name-calling and saber-rattling," but argued that details coming out of the summit were lacking.  "It's imperative that we actually get action here, not just photo ops," Schumer said.  "If the United States is unable to win concrete, lasting concessions from North Korea, the meeting alone will be a victory for Kim Jong-un and a defeat for President Trump."

The Senate minority leader criticized the joint diplomatic statement between Trump and Kim as lacking detail and accused the North Korean leader of backing out of agreements.  "The document is short on details," Schumer said. "It is worrisome, very worrisome, that this joint statement is so imprecise."

The Tuesday meeting was the first time a sitting U.S. president met North Korea's leader, and caps a remarkable turnaround for the two.  Last year saw the pair sling insults at each other, while North Korea conducted several ballistic missile tests in defiance of the U.S. and its allies.
Washington and the United Nations have imposed rounds of sanctions on North Korea over the country's weapons programs over the last several years.