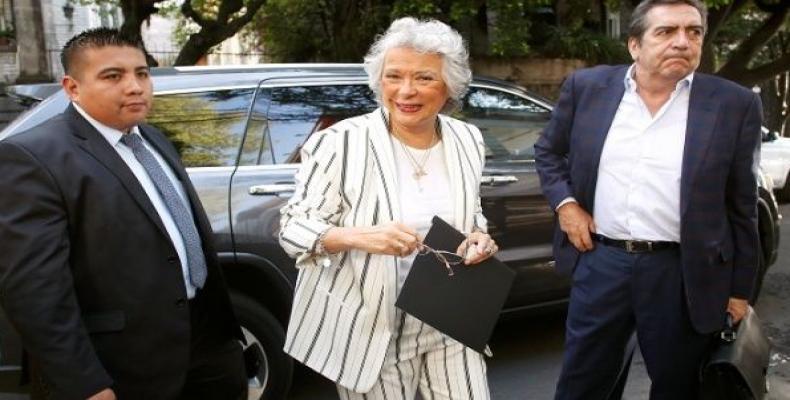 Mexico City, July 19 (RHC)-- Mexico's future secretary of the interior said the government of President-elect Andres Manuel Lopez Obrador will implement a national plan to repair relatives of victims and prevent further forced disappearances, as well as a new strategy to combat this national problem that has left tens of thousands missing.

“It's time to talk about memory and reparations.  We won't simulate a human rights policy and that there's nothing going on in Mexico.  The State has been unable to prevent disappearances, of looking for the victims and finding out their whereabouts,” said Olga Sanchez Cordero, the soon-to-be secretary of the interior.

In a forum called “Oblivion, truth or justice?” Sanchez Cordero pledged the future government will review the possibility of drug decriminalization, reparation for victims and work on public policies aiming to recover and promote economic spaces and life projects as an alternative to the violent “war on drugs.”

Speaking about drug decriminalization, a controversial proposal that a great part of the conservative Mexican society opposes, Sanchez Cordero echoed the words of Lopez Obrador, who said he would do “anything necessary to pacify the country.”

One of Lopez Obrador's main campaign promises is a possible amnesty on minor crimes, as part of his “national reconciliation” plan, a proposal criticized by many who fear “the criminals will be out on the streets again.” Besides, Sanchez Cordero also announced plans for a reduction of sentences for those who provide information about missing people and future “truth commissions” to investigate the thousands of cases of forced disappearance in the country.

The truth commissions would investigate specific cases and complete regions, besides a “great national truth commission” in charge of analyzing cases all across the country.  All these commissions should work side-by-side with the State's justice authorities, taking into account the demands of the victims.

After Sanchez Cordero finished speaking, several mothers and relatives of missing people demanded her efforts for the thousands of disappeared in the country, not only the 43 students from a rural school in Ayotzinapa that were kidnapped by security forces.

“We want a solution for the thousands of disappeared, more than 43! with all due respect that the parents of the 43 deserve, but there were thousands missing before them!” said one of the women present at the forum.  “We want justice for all, we've been looking for it for years!” said another.  “Because alive they took them, alive we want them!” yelled several together.

The poet and activist Javier Sicilia was also present at the event and, even though he welcomed many of the proposals, he also criticized the invitation of Pope Francis for the future peace dialogues in Mexico, calling the move a “truly regrettable show.”

On Sunday, Lopez Obrador presented the first 50 reforms to be implemented, mostly dealing with corruption.  Among the proposals is the creation of a totally independent anti-corruption prosecuting office to combat that “evil that has done so much damage to Mexico.”

“The General Prosecuting Office will be absolutely autonomous, it won't be interfered by the president of the republic,” said Lopez Obrador speaking at a press conference at the staircases of his office in Mexico City, “the anti-corruption attorney will act with absolute freedom and punish anyone who commits a crime of that nature, whoever it is, including partners in struggle, public servants, friends and family.

The reforms will also allow the president to be judged on corruption charges, as well as a removing legal immunity for government officers.