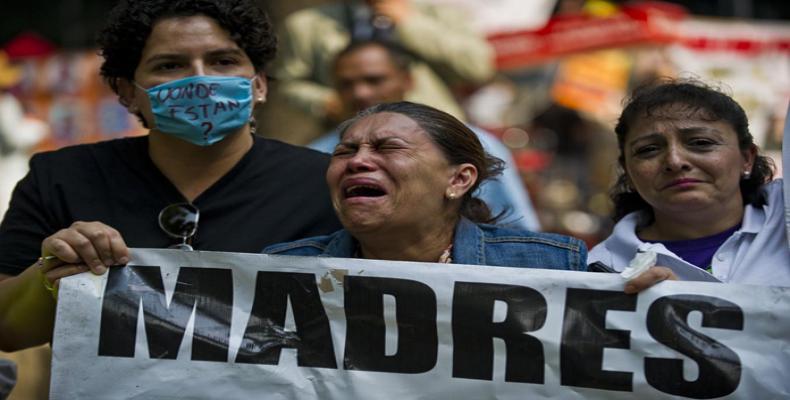 Mexico City, July 7 (RHC-teleSUR)-- According to human rights organizations, Mexico should created a national search system for the disappeared.  More than 28,000 people have disappeared in Mexico in the decade since the country began its war on drugs, according to a report published by the Mexican Commission for the Defense and Promotion of Human Rights.

Unlike the disappeared from Argentina´s Dirty War, and other campaigns of state repression in Latin America during the Cold War period, the reasons for the 28, 161 people in the Missing or Disappeared People National Registry are not necessarily tied to any Leftist activism. But just as state officials in Argentina, Paraguay, Chile, Honduras, Guatemala and elsewhere were slow to investigate the disappearances, so too have Mexican officials been reluctant to account for the missing.

The commission says that it is unaware of any current or ongoing state investigations into any of the 28,000 who have vanished.  The Representative of the Office of the United Nations High Commissioner for Human Rights, Jan Jarab, said the few actions taken by the Mexican government to investigate or address the disappearances have failed.

The most infamous disappearance over that period is the 2014 disappearance of 43 undergraduate students at a teachers college from the city of Iguala in southwestern Mexico.  According to a 608-page report by the Inter-American Commission on Human Rights, the students were headed to a ceremony in Mexico City to commemorate the 1968 massacre of as many as 300 students when they were intercepted by municipal police officers.  With military intelligence, and federal law-enforcement officers nearby, the report said, the students were forced at gunpoint into a convoy of police cars and never seen again.

The Mexican Commission for the Defense and Promotion of Human Rights proposed a system of tracking and investigating disappearances but organization officials acknowledged they had little hope the Mexican government would consider the idea.