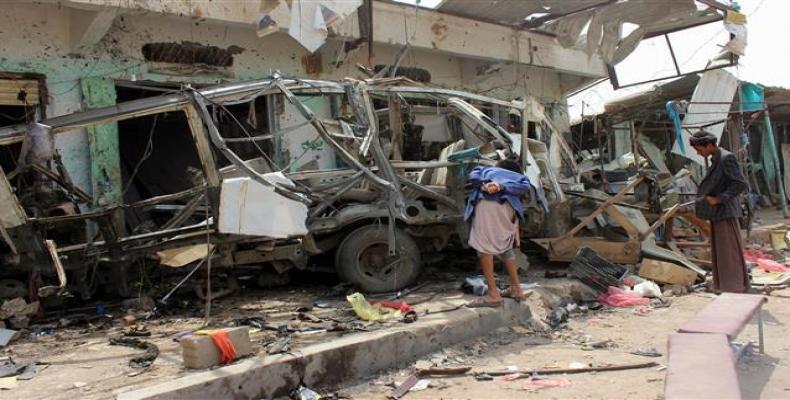 Sanaa, August 24 (RHC)-- At least 31 civilians, mostly children, have been killed after a Saudi-led airstrike hit their vehicle in Yemen’s Hudaydah province, only two weeks after a strike by the invading military coalition hit a school bus in the impoverished country and killed scores of Yemeni children.

Yemen’s Arabic-language al-Masirah satellite television network, citing a spokesperson of the country’s Health Ministry, reported that all the victims, whose vehicle was also destroyed in the strike in Durayhimi city on Thursday, were internally displaced people.

Al-Masirah, citing local sources, had reported earlier that at least 22 children and four women lost their lives in the deadly strike, adding that all passengers in the vehicle were killed.

On August 9th, Saudi-led warplanes hit a school bus in the town of Dhahyan in Yemen’s northern province of Sa’ada with a 227-kilogram laser-guided Mark 82 bomb, killing a total of 51 people, among them 40 children, and leaving nearly 80 others wounded.

Later investigations by Yemeni authorities revealed that the bomb had been supplied by the U.S. to the Saudi-led military coalition.  Furthermore, a report by the CNN also confirmed what Yemeni authorities had announced about the origin of the bomb.

Yemen’s Ansarullah movement has condemned the attack, saying that the blood of children was spilt again before that of those killed in the bus attack was dried.

The Saudi-led aggression has also taken a heavy toll on the country's infrastructure, destroying many hospitals, schools, and factories. The United Nations has said that a record 22.2 million Yemenis are in dire need of food, including 8.4 million threatened by severe hunger.

Several Western countries, the United States and Britain in particular, are also accused of being complicit in the ongoing aggression as they supply the Riyadh regime with advanced weapons and military equipment as well as logistical and intelligence assistance.