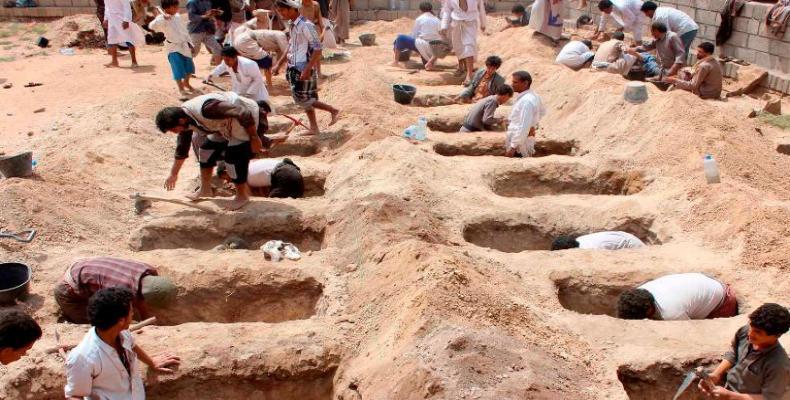 Sanaa, August 15 (RHC)-- Thousands of mourners gathered in Yemen’s northern city of Saada for the funerals of 51 people, including 40 children, who were killed in a U.S.-backed Saudi-led coalition airstrike on a school bus last week.

The massacre of school boys between the ages of 6 and 11 was one of the worst attacks on children in the history of Yemen’s brutal war.  Images posted online suggest a U.S.-built Mark 82 bomb was used in the bombing.

UN Secretary-General António Guterres has condemned the air strike, calling for an independent investigation into the deadly attack. Saudi Arabia responded by saying it will launch its own investigation, claiming the air strike was a legitimate military operation.

Shireen Al-Adeimi, a Yemeni scholar and activist, told Democracy Now: "This is just the latest string, unfortunately, of really brutal attacks on civilians in Yemen.  It is not the worst of its kind in terms of the numbers of people killed, but certainly because 40 out of the 51 people who were killed were children, it really is just an extreme form of this Saudi-led coalition bombing in Yemen.  Here were these kids on a school trip.  They were excited.  There’s footage -- we see them laughing and really being excited.  Some of the parents said that they couldn’t really sleep the night before because they were so looking forward to their field trip.  And as the bus entered a busy market, it was targeted by the Saudi-led coalition and most of these children were killed.  Of course, we know that the U.S. is part of the Saudi-led coalition," so Washington in fact is responsible, "just as much as the Saudis and Emiratis are, in the bombing of those children."