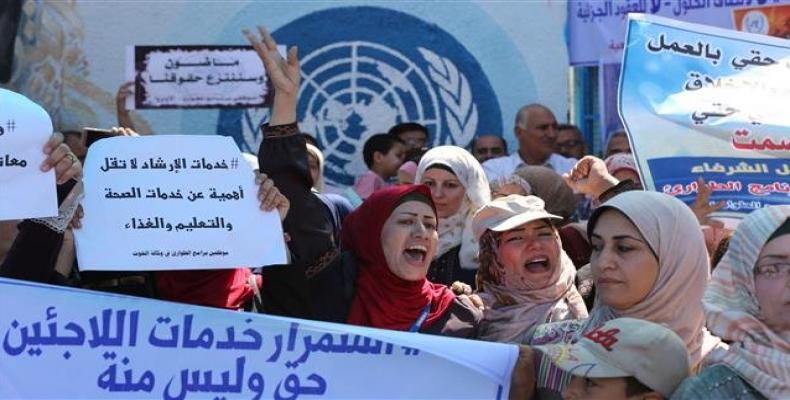 Gaza City, October 3 (RHC)-- The UN agency for Palestinian refugees has announced it would temporarily withdraw part of its foreign staff from the Gaza Strip following security concerns linked to job cuts in the Palestinian enclave.  In a statement, the agency said it had "decided to temporarily withdraw part of its international staff from Gaza following a series of worrying security incidents affecting its personnel in the strip."

A source with knowledge of the situation said six foreign staffers remained out of the 19 who are usually there.  The Israeli defense ministry unit that oversees the crossing said a number of foreign employees from the agency known as UNRWA "were evacuated from the Gaza Strip to Israel" earlier this week.

UNRWA employees in the strip have held strikes, sit-ins and other protests since the agency announced in July it was cutting more than 250 jobs in Gaza and the occupied West Bank.  Hundreds of full-time roles have also become part-time.  Laid-off workers warn that their families will be at serious risk in blockaded Gaza, where unemployment is at some 53 percent.

An UNRWA source said a protest was held outside a Gaza City hotel where agency officials were meeting. The agency's statement said that "earlier, a number of staff members were harassed and prevented from carrying out their duties."  "Some of these actions have specifically targeted the UNRWA management in Gaza," it said.

It called on the authorities in the enclave run by Islamist movement Hamas "to respond to its repeated demands to provide effective protection to its employees and facilities."  "The lack of effective security and safety risk impacting vital humanitarian services to more than 1.3 million refugees in Gaza," it said.

UNRWA's head in Gaza has previously accused the agency's labor union in the enclave of "mutiny." The United States has traditionally been UNRWA's largest contributor, providing around US$350 million a year, but Trump has canceled all support.  It received pledges of $118 million from donor countries last week to help it overcome the funding crisis, but still has a shortfall of $68 million in its annual budget.

Created in 1949, the agency supplies aid to more than three million of the five million eligible Palestinian refugees in Jordan, Lebanon, Syria and the Palestinian territories.  Around 13,000 people work for UNRWA in Gaza, where more than two-thirds of the roughly two million residents are eligible for aid. The agency also says more than 200,000 Palestinians attend its schools in the Gaza Strip.

Despite the removal of part of its foreign staff, UNRWA operations were continuing in Gaza, the agency said. Its director of operations and other international staff were remaining in Gaza.

More than 750,000 Palestinians fled or were expelled during the 1948 war surrounding Israel's creation. They and all their descendants are deemed by the UN agency to be refugees who fall under its remit.