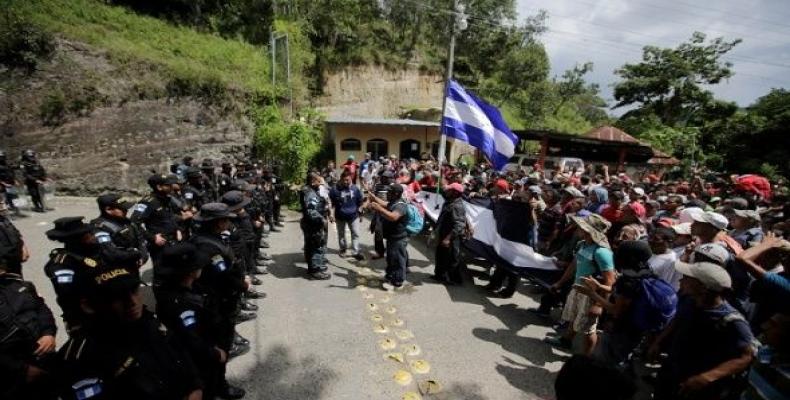 Guatemala City, October 17 (RHC)-- A group of nearly 3,000  Honduran caravanistas crossed the border into Esquipulas, Guatemala, despite being temporarily held up by Guatemalan officials and armed military.

This is the second time this year that a so-called "Migrant Walk" has left Honduras in order to escape extreme violence and unemployment in a country that registered over 3,790 homicides in 2017 and with seven percent unemployment, according to the Northern Triangle Mobility Initiative.

"Si se pudo, si se pudo, el pueblo unido jamas sera vencido!" (Yes we did it, Yes we did it.  A united people will never be defeated).  Several migrants chanted a popular protest refrain in Spanish as they ran after Guatemalan agents and pushed their way onto the highway in the neighboring country.  Reports say that others sang the Honduran national anthem.

The overwhelmed security forces did not stick to their country’s official line released earlier by the Guatemalan Migration Institute (IGM) that read: "Guatemala does not promote or support irregular migration in any of its forms, therefore it rejects the movements organized for illicit purposes and ... migration for private purposes."  The institute went on to say that no migrant could enter the country without the proper migratory paperwork, which the vast  of the migrating Hondurans do not possess.

According to some reports, several Guatemalan police forces even defied orders and accompanied the caravan several kilometers into the country.  The group, composed largely of women with their children in tow, have not been deterred by Guatemalan riot police, or U.S. President Donald Trump’s tweet Tuesday morning that read: “The United States has strongly informed the President of Honduras that if the large Caravan of people heading to the U.S. is not stopped and brought back to Honduras, no more money or aid will be given to Honduras, effective immediately!”

Last year, the U.S. sent Honduras more than $19 million in aid, the majority of which -- $13,768,000 -- went to ‘counter-drug assistance’ and another $4.5 million went directly to ‘military’ spending for the small country of just over 9 million people.

The march began with around 160 people leaving out of Honduras’ most violent city, San Pedro Sula Saturday, according to leftist politician and caravan organizer, Bartolo Fuentes. Some migrants plan to seek refugee status in Mexico while most others are hoping to move to the United States where over 10 percent of the country’s population already resides.

"We're coming to Donald Trump.  He has to let us into the United States," Andrea Fernandez, 24, who was carrying a baby under the age of one and walking with a 5-year-old girl, told Reuters.

Keilin Umana, a 21-year-old who is two months pregnant, told the AP she was motivated to leave Honduras after she was threatened with death.  The country is overrun by mafias and cartels that rule over neighborhoods with impunity, extorting communities and torturing and killing those who attempt to not comply.

Umana, a nurse, said she had already been walking for four days.  “We are not criminals — we are migrants,” said the medical professional.  Others say they are traveling because there’s no work in their home country.

The Red Cross was on hand at the border to care for those who fainted from signs of heat stroke and exhaustion.

The U.S. embassy in Honduras released a statement over the weekend warning travelers: "The United States vigorously enforces its immigration laws," harkening memories of the thousands of Central American families that U.S. officials separated after they reached the U.S.-Mexico border last April and May following the previous migration caravan.  U.S. migration authorities arrested thousands of parents during those months and threw their kids into cages in detention centers throughout the country.

As of August, nearly 500 of the minors were still in U.S. custody, according to the Washington Post.

Just last week U.S. Vice President Mike Pence met with the presidents of Honduras, Guatemala and El Salvador to discuss their Alliance for Progress program, an economic plan initiated in 2014 with the supposed intent to halt mass migration by curbing corruption and violence at home.