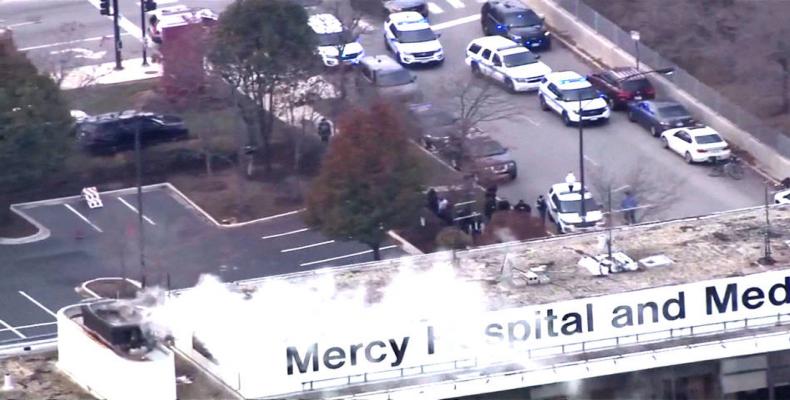 Chicago, November 20 (RHC)-- A shooting rampage in the U.S. city of Chicago has led to four deaths, including the gunman and a responding police officer.  The shooting erupted on Monday afternoon at Chicago's Mercy Hospital after a domestic dispute between the gunman and his former fiancée, a doctor working at the hospital, turned violent, leading to her death in a parking lot.   "Then once she fell to the ground, he stood over her and shot her three more times,” said witness James Gray speaking to reporters.

Witnesses say the shooter then turned towards the hospital and started shooting randomly before exchanging fire with responding police officers inside the building, fatally shooting police officer Samuel Jimenez.  Another fatally shot victim has been reported to be a pharmaceutical assistant working at the center.

The recent hospital shooting is just the fourth mass shooting in the United States in about a month, notably including the killing of 11 Jewish worshipers at a synagogue in Pittsburgh, Pennsylvania on October 27, and about a dozen others killed in Thousand Oaks City, ten days later.

There have been 307 mass shootings in the U.S. so far this year, new data shows.  The United States loses around 33,000 people to gun violence anually. Additionally, more than 100,000 people are shot each year in the country at a total cost of $45 billion, according to a study published in the Health Affairs journal.

The issue of gun violence has become all the more polarizing under President Donald Trump, a Republican whose presidential campaign was funded partially by the National Rifle Association (NRA).  Trump has been reluctant to address the growing issue in his speeches and following several high-profile mass shootings in the country.   However, faced with mounting pressure, the president agreed earlier this year to sign a $1.3 trillion spending bill that included modest improvements to background checks for gun sales and grants to help schools prevent gun violence.