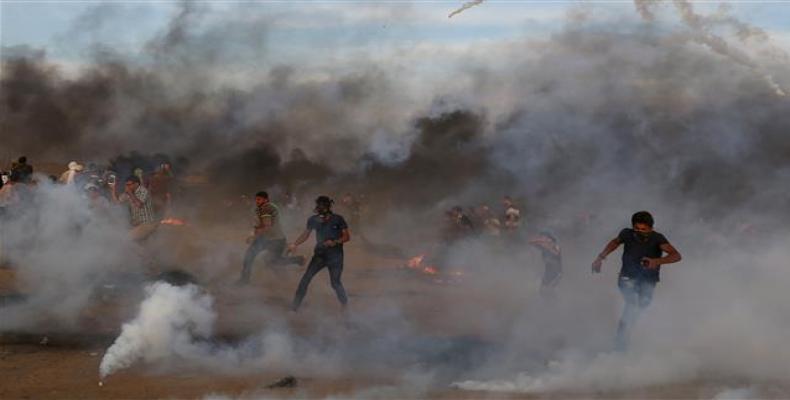 Gaza City, December 26 (RHC)-- Israeli forces have wounded at least 27 Palestinian protesters who were staging a rally along the northern coast of the besieged Gaza Strip against the nearly 12-year-long Israeli-imposed blockade on the impoverished sliver.

According to the Palestinian Ma'an News Agency, at least 14 protesters were struck with live bullets, while 13 others suffered wounds after being hit with rubber-coated steel.  Israeli navy forces fired live rounds and teargas canisters at both marchers and boats in an attempt to disperse them.

Dozens of demonstrators suffered teargas inhalation as well, and were transferred to hospitals for treatment.  The demonstration on Monday was the 21st weekly naval protest setting off from the Gaza seaport, with the participation of dozens of Gazans’ fishing boats, against the crippling blockade of the sliver.

In May 2017, Israeli authorities increased the fishing area for Gazan fishermen to nine nautical miles.

The Gaza Strip has been under an Israeli blockade since June 2007. The blockade has caused a decline in the standard of living as well as unprecedented levels of unemployment and unrelenting poverty.

Tensions have been running high near the fence separating Gaza from the occupied territories ever since anti-occupation protest rallies began in the Gaza Strip on March 30.

On December 21, at least three Palestinians, including a teenage, were shot dead by Israeli fire and over 100 others sustained injuries during anti-occupation protests along the border between the besieged Gaza Strip and the Israeli-occupied territories.

The Gaza clashes reached their peak on May 14, on the eve of the 70th anniversary of Nakba Day (Day of Catastrophe), which coincided this year with the U.S. embassy relocation from Tel Aviv to occupied East Jerusalem.

Human rights groups have repeatedly slammed the Tel Aviv regime for its shoot-to-kill policy as a large number of the Palestinians killed at the scene of attacks did not pose any serious threat to Israelis.