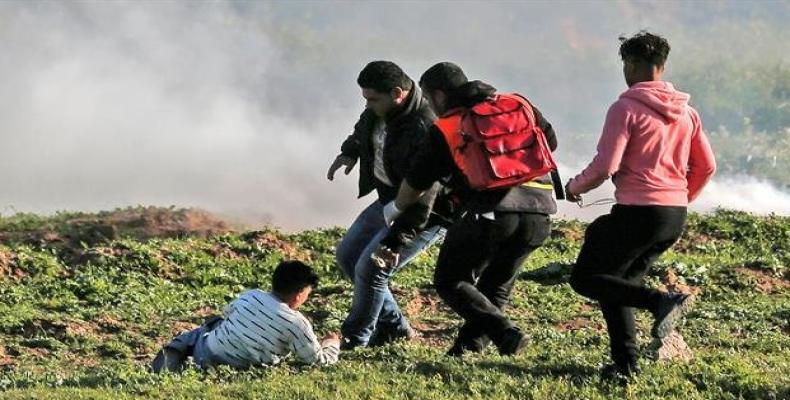 Gaza City, February 23 (RHC)-- Israeli forces have shot dead a Palestinian and injured dozens more in mass protests along the fence separating the besieged Gaza Strip and the Israeli-occupied territories for the 48th consecutive Friday.

The spokesman for the Gaza Ministry of Health, Ashraf al-Qidra, said in a statement that 15-year-old Yusuf Saeed Hussein al-Daya was fatally shot in the chest during a Great March of Return protest east of Gaza City.

Qidra added that 41 demonstrators were struck with live rounds and transferred to nearby hospitals. Three of the injuries were described as critical. Among the wounded Palestinians was paramedic Fares al-Qudra, who sustained injuries when a tear gas canister hit him in the head.

Palestinians have held weekly protests on the Gaza border over the siege on the enclave and the right for refugees to return to their homes they were forcibly expelled from during the 1948 creation of Israel.

The Gaza clashes reached their peak on May 14 last year, on the eve of the 70th anniversary of the Nakba Day (Day of Catastrophe), which coincided this year with the US embassy relocation from Tel Aviv to occupied East Jerusalem.

On June 13, 2018, the United Nations General Assembly adopted a resolution, sponsored by Turkey and Algeria, condemning the Israeli regime for the death of Palestinian civilians in Gaza.