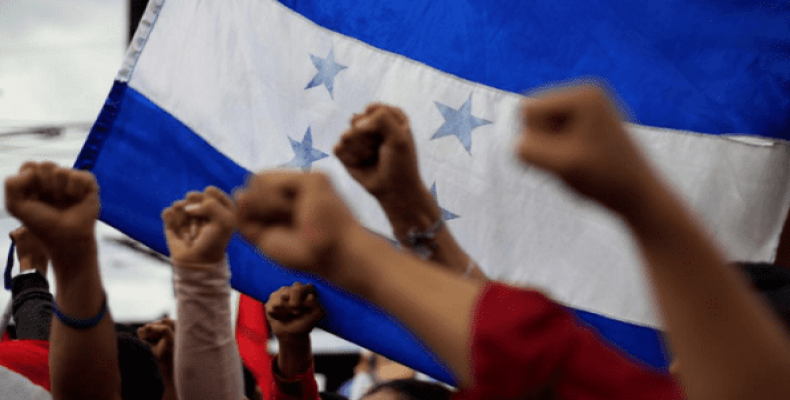 Tegucigalpa, August 8 (RHC)-- Thousands of protesters took to the streets of the Honduran capital Tegucigalpa to demand President Juan Orlando Hernandez step down, just days after he was accused of taking drug money to finance his 2013 presidential campaign.

Several buildings were set on fire after protests and riot police clashed with demonstrators while attempting to disperse the crowd with tear gas and water cannons.  "The narco must go, JOH must go!" protesters chanted, using the president's initials, as they marched through central Tegucigalpa toward Congress.

A court filing was published late last week in which U.S. prosecutors alleged that Hernandez's 2013 presidential bid had been partly funded by money from drug traffickers.  The document filed to the U.S. Southern District Court of New York said the Hernandez campaign received $1.5 million from "drug proceeds" that were used to bribe local officials in exchange for protection and the completion of public works.

A right-wing ally of the United States, Hernandez has come under increasing pressure since his younger brother Tony was arrested in Miami in November on drug trafficking charges.  At that time, Hernandez said no one was above law.  However, his link to drug trafficking was revealed last week when a court document on his brother’s case was declassified.

The demonstration against Hernandez was called by the Platform for the Defense of Education and Public Health, a coalition of trade unionists and public workers that have sought the president's ouster over his plans to privatize public services.