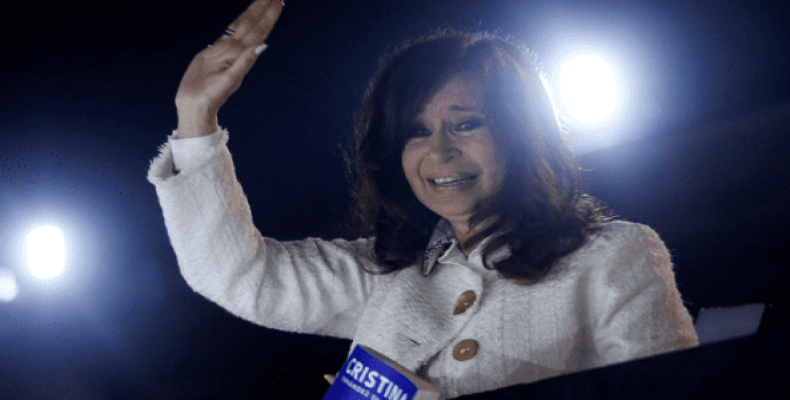 The former Argentinian president and current vice presidential candidate, made a public appearance to discuss her book, “Sincerely” at an event in La Plata where she said Macri is responsible for the country’s economic crisis.

"We knew we were going to win but not because of the difference in votes that we received," said the former president at the major outdoor event that brought thousands to see the legislator as she spoke in the city just south of Buenos Aires.

Fernandez admitted to the crowd that when she left the presidency in 2015, Argentina had problems, like inflation, "but it was a country that was on its way."   "What is happening with the economy" and the primary results, "are because of the policies that this government has carried out since December 10, 2015."

Now the economy has been in a deep recession since April 2018 and continues to worsen, said the candidate.  Fernandez underscored that country’s current economic and social situation is "infinitely worse and almost unmanageable."

Earlier this week, President Mauricio Macri whose administration negotiated the loan last year, went back to the IMF asking the institution to refinance their original agreement. According to official figures, the Fund has delivered $44.5 billion to the Macri administration since June 2018. However, by July of this year, $36.6 billion had already been taken out of the country by private investors.

The move prompted the country’s international investment risk to surpass the 2,000 point-level, similar to its 2005 numbers, and the peso devalued by three points to 58 to each U.S. dollar. To appease loan conditions, the government has drastically cut spending in healthcare, education, art, science and technology.  The nation’s poverty index has risen to 32 percent for adults, and 48 percent for children.

“He is not a good human being,” Fernandez said referring to Macri.  “He is beyond a good leader or a bad president.  He is a bad human being to do these things to society," she said.

This is the first public appearance the senator has made after the primaries in which she and  Front for All presidential candidate, Alberto Fernandez took 47.78 percent of the votes, well above incumbent Macri’s 31.79 percent.