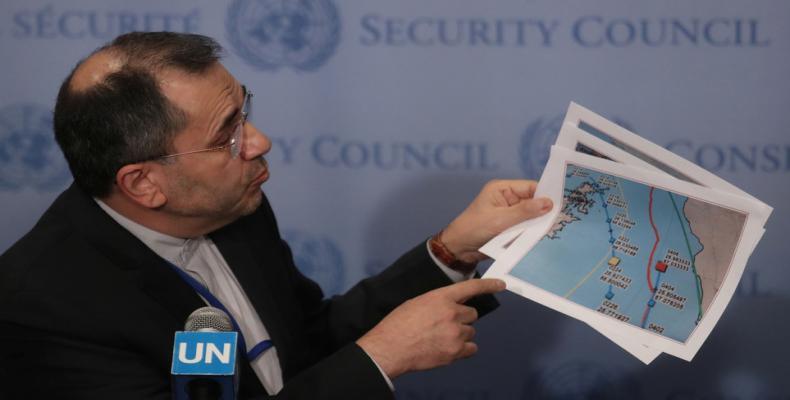 New York, September 29 (RHC)-- The United States has rejected a request by Iranian Foreign Minister Mohammad Javad Zarif to visit Iran's Ambassador to the United Nations Majid Takht-Ravanchi, who is being treated for cancer in a hospital in New York.

The U.S. State Department made the announcement, adding Zarif could only visit his ill colleague if Tehran released one of the several American citizens detained in Iran.

Due to U.S. sanctions and travel restrictions placed on Zarif in July, the foreign minister can only travel between the John F. Kennedy airport and a limited area surrounding the UN building in New York where he is to take part in the 74th session of the United Nations General Assembly.

Washington has detained a number of Iranian citizens on grounds of violating U.S. sanctions against Tehran.  Masoud Soleimani, a top stem cell scientist held behind bars in the United States without trial for nearly a year, is among the detained Iranian individuals.  He, too, is suffering from a worsening health condition.

Iran has on numerous occasions offered to negotiate a prisoner exchange in order to free the detained Iranians.

Travel restrictions targeting Iran’s top diplomat have also been imposed on other Iranian diplomats and their families in New York.  The measure, described as "basically inhuman" by Zarif, is part of a growing list of measures adopted by the Trump administration in a bid impose “maximum pressure” on Tehran.

The U.S. initiated its anti-Iran campaign principally by withdrawing from the multilateral Joint Comprehensive Plan of Action (JCPOA) last year and reimposing unilateral sanctions that had been lifted under the deal on Iran.

Speaking on his return from the UN General Assembly, Iranian President Hassan Rouhani said that European signatories of the deal -- Germany, Britain and France -- had insisted that a meeting between Iranian and American officials would lift “all sanctions against” Iran.

Rouhani, however, rejected the offer, arguing that true negotiations and talks could only take place if the “toxic atmosphere of maximum pressure” against Iran ceased to endure.

While U.S. President Donald Trump has claimed to be looking forward to a meeting with Iranian officials on many occasions, many observers have pointed to the Trump administration's often conflicting messages regarding Iran, consequently complicating diplomatic efforts.

While Trump welcomed the idea of meeting Iranian officials during the 74th UN General Assembly in remarks made earlier this month, the Iranian president's trip to the UN summit was almost canceled as Washington delayed issuing visas for the Iranian delegation.  Rouhani was even placed under travel restrictions while visiting New York.

Speaking upon his arrival in New York, Rouhani remarked that Tehran would support transferring the UN headquarters to a “more patient" country.  "If we're asked about moving the UN somewhere else, we support that," Rouhani told reporters.