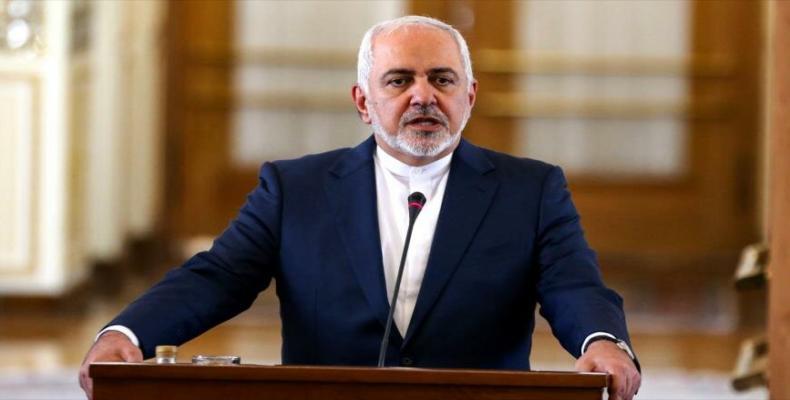 Frankfort, September 30 (RHC)-- Iran's Foreign Minister Mohammad Javad Zarif has lambasted Germany, France and Britain -- three of the European signatories to the 2015 Iran nuclear deal -- for echoing statements and claims made by the United States regarding the Islamic Republic.

The Iranian top diplomat made the remarks on Sunday night, during a layover in the German city of Frankfort on his way to Tehran from New York, where he attended the 74th UN General Assembly.

Zarif said when in Europe he had talked with the president of a permanent member of the United Nations Security Council, whose country is nuclear-armed.  He told the Iranian foreign minister that he could not do anything witho a permission from U.S. President Donald Trump.

“If these days you see that the Europeans are getting a little closer to the U.S. and becoming its allies, it's not because they saw us in a weak spot, but because they have failed to withstand the U.S.,” Zarif said, addressing Iranian officials, their families and a group of Iranians living in the German city.

Tensions have been running high between Iran and the U.S. since May 2018, when Trump unilaterally pulled out his country from the multilateral nuclear deal with Iran, officially known as the Joint Comprehensive Plan of Action (JCPOA), and unleashed the “toughest ever” sanctions against the Islamic Republic.

The American president is a stern critic of the deal, which was clinched in July 2015 by Iran and the P5+1 group of countries, including the US, France, Britain, China, Russia, and Germany.

Ever since quitting the JCPOA, Trump has been trying to force Iran into accepting a more wide-ranging alternative that curbs Tehran’s missile program and regional influence.  “For the past five months, Europe has been trying to give us credit in return for the sale of the Iranian crude oil to make the country stay in the JCPOA, but it has not been able to do even this little job because it is not even allowed by its master to spend its own money for its own security,” Zarif further said.

Back in January, Britain, France, and Germany announced the establishment of a mechanism aimed at enabling non-dollar trade between the 28-nation bloc and Iran, officially called the Instrument in Support of Trade Exchanges (INSTEX).

The apparatus is supposed to circumvent the sanctions that Washington began re-imposing against Iran after leaving the JCPOA. But in reality not much has been achieved.  Trade with Iran has not surged via INSTEX, and Europe has not stood up to the US over its illegal sanctions against Iran.

The three European countries have so far failed to uphold their commitments. They have expressed vocal support for the JCPOA, but failed to provide meaningful economic incentives as required under the nuclear agreement.

Iran has time and again said it never talk with the US on any level until all US sanctions are lifted first.