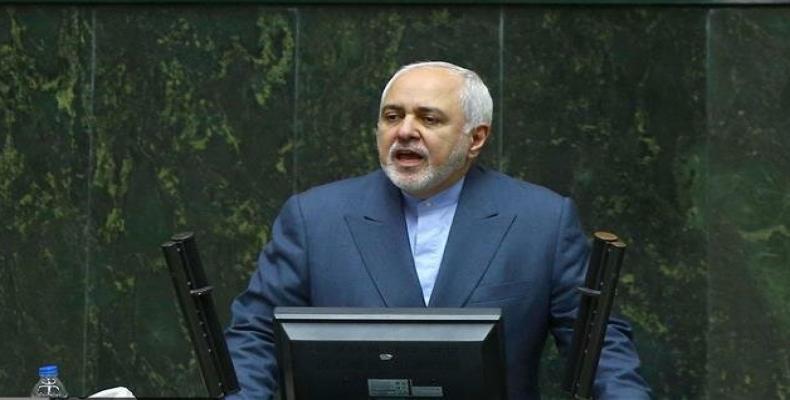 Tehran, October 6 (RHC)-- Iranian Foreign Minister Mohammad Javad Zarif says the European signatories to a nuclear deal signed between Iran and major world powers in 2015 are legally in no position to withdraw from the accord.

Zarif made the remarks in Tehran on Sunday while addressing an open session of the Iranian Parliament, saying that the three European parties to the nuclear deal, officially known as the Joint Comprehensive Plan of Action (JCPOA), have failed to fulfill their obligations under the pact and even violated it in some cases.

"In addition to the US that blatantly violated the agreement through its withdrawal, the Europeans (Britain, France and Germany) have also put on the same attitude in some cases," the top Iranian diplomat said.

Zarif emphasized that the JCPOA was an international agreement, which has been ratified by the United Nations and has a clear framework, emphasizing, "The US has pulled out of the deal in violation of international regulations."

U.S. President Donald Trump is a stern critic of the nuclear accord, which was clinched by Iran and the five permanent members of the UN Security Council plus Germany.  Under the agreement, nuclear-related sanctions against Iran were lifted in exchange for curbs on Tehran's nuclear program.

Trump unilaterally withdrew the U.S. from the deal in May 2018 and unleashed the "toughest ever" sanctions against the Islamic Republic in defiance of global criticism in a bid to strangle the Iranian oil trade.

In response to the White House, Tehran has so far rowed back on its nuclear commitments three times in compliance with Articles 26 and 36 of the JCPOA but stressed that its retaliatory measures will be reversible as soon as Europe finds practical ways to shield the mutual trade from the U.S. sanctions.

The Atomic Energy Organization of Iran (AEOI) said on Sunday that Tehran will continue to further scale back its commitments under the JCPOA if the other signatories fail to keep their side of the bargain.

"Iran's decision to reduce part of its commitments under the JCPOA was taken after one-year strategic patience in response to a unilateral move by Washington to withdraw from the deal and with the purpose of striking balance between the [country's] rights and commitments," said the AEOI's deputy head for international, parliamentary and legal affairs, Behrouz Kamalvandi.

European Union foreign policy chief Federica Mogherini said late last month that the remaining parties to the nuclear deal had expressed their commitment to preserving it, stressing, however, that there were increasing difficulties ahead.  "It is in the interests of all to remain committed to the deal, but it is becoming increasing difficult," Mogherini told reporters after a meeting of the parties at the United Nations.