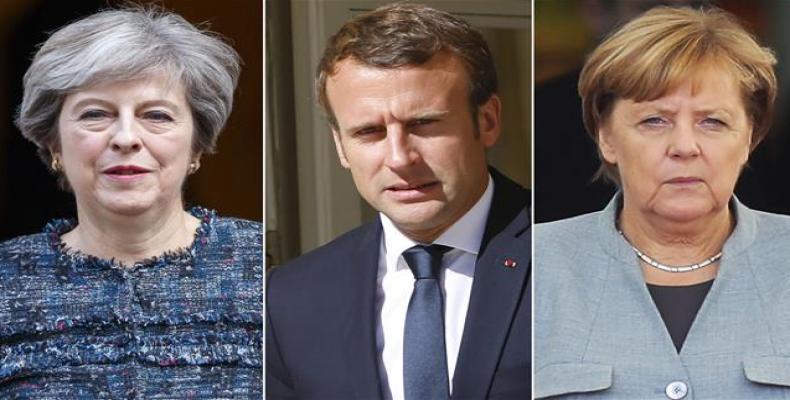 London, April 30 (RHC)-- The leaders of Britain, France and Germany have reaffirmed their support for the landmark nuclear deal with Iran, noting that it is the best way to keep limitations on Iran's nuclear program in place.

According to a statement by the office of Britain's Prime Minister Theresa May on Sunday, French President Emmanuel Macron and German Chancellor Angela Merkel made the remark in separate phone calls with the British premier as a May 12th deadline approaches for U.S. President Donald Trump to decide on whether to reestablish sanctions against Tehran.

Trump is a harsh critic of the nuclear deal reached between Iran and the five permanent members of the UN Security Council -- the United States, France, Britain, China, and Russia -- plus Germany.  Under the agreement, nuclear-related sanctions put in place against Iran were lifted in exchange for curbs on Tehran's nuclear program.

The U.S. president on January 12th reluctantly agreed to waive sanctions against Iran that were lifted as part of the landmark deal, but threatened to withdraw from the accord if some "disastrous flaws" were not fixed.

He said he wanted America's European allies to use the 120-day period before sanctions relief again came up for renewal to agree to tougher measures and new conditions; otherwise Washington would pull out of the deal.

The three European leaders, however, said the JCPOA might need to be broadened to cover other issues such as Iran's missile program.  "They committed to continue working closely together and with the U.S. on how to tackle the range of challenges that Iran poses -- including those issues that a new deal might cover," the statement said.

The latest allegation by European leaders came as Iran has repeatedly warned that any failure to respect the multinational agreement would have grave consequences, stressing that there is no alternative to the nuclear accord.

Iranian President Hassan Rouhani on April 24th warned the United States against violating the nuclear accord, saying any failure to respect the multinational agreement would entail "grave consequences."

Iran's Foreign Minister Mohammad Javad Zarif also said on April 23 that European signatories to the multilateral nuclear agreement should convince the US president not to pull out of the deal, because there is no "Plan B" for it.

Meanwhile, new U.S. Secretary of State Mike Pompeo said that President Trump had not yet taken any decision on whether to exit the Iran nuclear deal, although he was not likely to keep it without "substantial" changes.

Speaking at a news conference over the weekend after a NATO meeting of foreign ministers, Pompeo added that the U.S. administration was "unlikely to stay in that deal past this May" without a modification of the agreement.