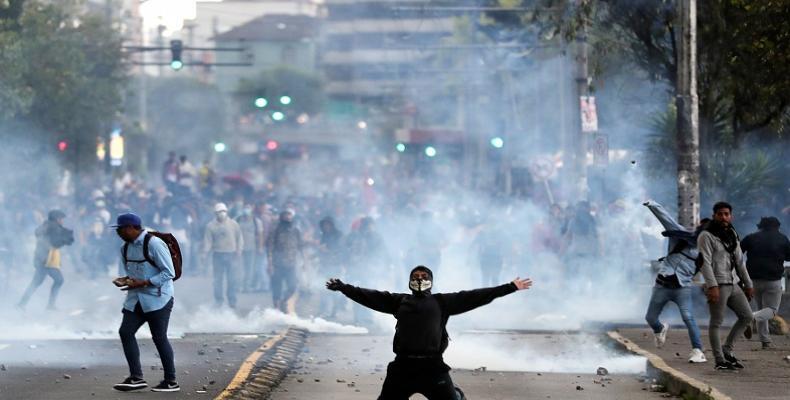 Quito, October 9 (RHC)-- The popular radio station Pichincha Universal says they have received information that Ecuador’s government has issued a detention order for their director Washington Yepez.  The radio station has played a leading role in covering the ongoing protests against IMF austerity, which was imposed by Lenin Moreno’s government.

In a separate case, leftist lawmaker Virgilio Hernandez also says that he has received ‘extra official’ information that a prison order is also being put out against him.

Pichincha Universal radio announced on Tuesday afternoon that their director Washington Yepez has a detention order against him, and faces incarceration for crimes of “inciting discord among citizens.”

Hours before this, the radio’s offices were raided by the police and their transmitting equipment was seized, forcing them off air. Pichincha Universal had been providing round the clock coverage of the mass protests, and is thought to be sympathetic to figures of the former leftist government of Rafael Correa.

At around the same time, leftist lawmaker Virgilio Hernandez also announced that he has been notified via ‘extra official’ means that he faces the same fate. Hernandez is a deputy for the Citizens Revolution Party, the movement led by Correa, he wrote defiantly: "They tell me, extraofficially, that they have ordered my detention, they want to silence a voice, but they don't hear that every minute the people shout louder: "Moreno Out!"

Hernandez had been personally named by Lenin Moreno in a televised statement, in which he claimed that Correa, along with Hernandez and a few others, had orchestrated the current protests after having traveled to Venezuela.

Protests have significantly intensified since the arrival in Quito of the Indigenous march on Monday.  In response, the government announced that they were moving the seat of government to the coastal city of Guayaquil, and shortly after, that a curfew was being imposed from 8 P.M. till 5 A.M. across the country in areas of ‘strategic importance.’

Most of the centre of Quito and the Ejido Park have seen pitched battles between anti-IMF protesters, and police who have used armoured vehicles and motorized units to help clear areas, often unsuccessfully.  A flashpoint on Tuesday was the National Assembly, near Ejido Park, where protesters briefly broke police lines and seized control of the legislature.

Protests are set to continue in the coming days as the government shows no sign of withdrawing the current austerity measures.  Likewise, protesters across the country remain determined to push on until the ‘paquetazo’ (package of IMF imposed measures) is reversed.