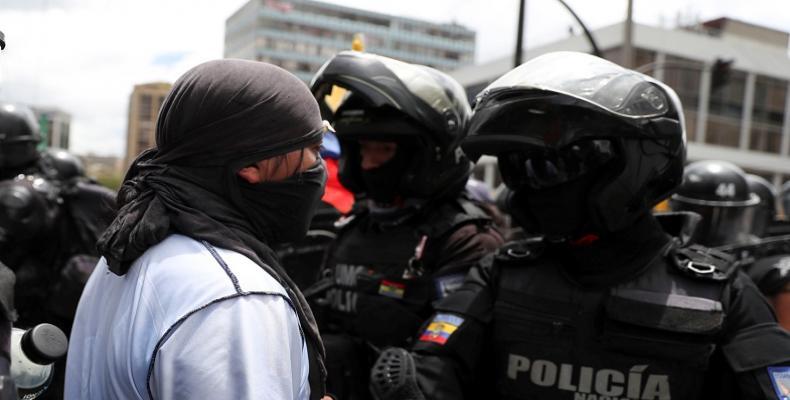 Quito, October 9 (RHC)-- Social organizations across the world like Brazil's MST, Argentina's Movement for the People, Colombia's Indigenous organization have expressed their solidarity with protests that have shaken Ecuador for almost week, rejecting the austerity measures imposed by the government of President Lenin Moreno.

"Sadly, the economic policies imposed by the International Monetary Fund only result with the bankruptcy of states, of their people," said Bolivian President Evo Morales in a speech celebrating the opening of an oil pit.  "When poverty grows and when inequality grows, riots occur, when policies are imposed top-to-bottom, how is Ecuador now? How is Argentina?" he added.

Morales emphasized that Bolivia was "freed" from the IMF tutelage when he was first elected in 2006, implementing economic policies defending sovereignty and engaging with social movements.   His words echo the message tweeted last week by Venezuelan President Nicolas Maduro, who expressed his "solidarity with the heroic people of Ecuador."

"Enough packages (of austerity measures imposed by) the IMF! Enough extreme poverty! May the force be with you, Ecuador," he tweeted.

Moreno has accused the leftist Correa, his one-time mentor and boss when he was vice president, of seeking a coup with the help of Venezuela's President Nicolas Maduro.  Speaking in Belgium, where he lives with his family, Correa has strongly denied the accusation, while movements like France's Unbowed, a polictical umbrella of former leftist presidential candidate and senator Jean-Luc Melenchon, denounced the accusations, saying Moreno was "pitiful for running away from his people."

On Tuesday, other social movements sent messages of support to Ecuador's protestors, including Colombia's National Indigenous Organization, or ONIC, which expressed solidarity especially to their fellow organization CONAIE who has taken the lead on the protests in recent days, and to the Confederation of Kichwa Nationality in Ecuador.

In Argentina, protesters from the Movimiento de los Pueblos in Buenos Aires also expressed solidarity as they are also facing budget cuts in public services and austerity measures imposed by conservative President Mauricio Macri, also as part of a deal with the IMF.  "Unity of the peoples is necessary in order to confront the policies of the IMF," said activist Nicolas in the name of the movement.

Also, lawmakers from the Socialism and Liberty Party (PSOL) delivered a strong statement at the Brazilian Congress session Tuesday where they criticized Moreno and his government and called on the Foreign Relations Commission to summon the Ecuadorean ambassador to demand explaintaions for deaths and police repression against protesters.