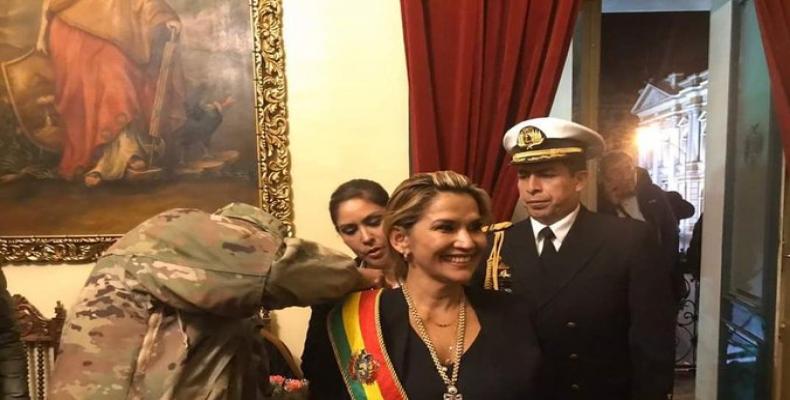 La Paz, November 13 (RHC)-- Opposition Senator Jeanine Áñez declared herself president of Bolivia on Tuesday, despite not meeting with the constitutional requirements for such a move, as Parliament did not achieve a quorum because the lawmakers of the Movement to Socialism (MAS) could not attend.  MAS has a two-thirds majority in Parliament.

The senator proclaimed herself president only with a minimum presence of deputies, all from the opposition.  On Tuesday, an extraordinary session of both chambers (Deputies and Senate) of the Plurinational Legislative Assembly (Parliament) was convened, but the representatives of the Movement to Socialism did not attend because they did not have guarantees for their safety and that of their family members.  Therefore, Parliament had suspended its session due to the lack of quorum.

A photo which has gone viral on the social media shows a military officer in uniform placing the presidential sash around the newly-self-appointed right-wing senator who claims to be the President of Bolivia.

Violence in the country continues by radical opposition groups that have burned symbols of the indigenous population.  Meanwhile, in La Paz, thousands of supporters of Evo Morales are being mobilized in rejection of the coup d'état and its discriminatory and racist acts.