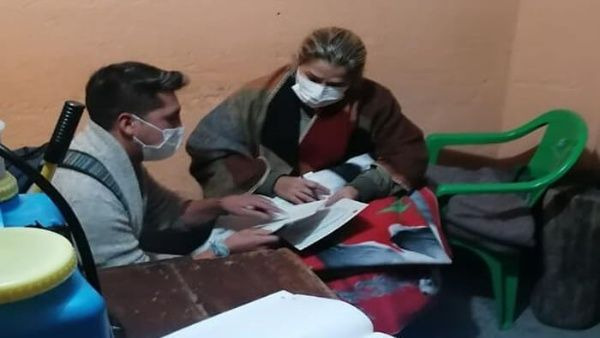 La Paz, March 22 (RHC)-- The Bolivian Ministry of Government reports that former de facto president Jeanine Áñez knew about of the transfer order to the Women's Penitentiary Center of Miraflores in the department of La Paz.

According to the Bolivian agency, Jeanine Áñez had signed the document that enabled her transfer from the Obrajes penitentiary to the Miraflores penitentiary.  According to the document, the Miraflores Female Penitentiary Center has an environment for the health area with the necessary equipment, guaranteeing access to health care in compliance with medical protocols and biosecurity measures.

The Ministry of Government pointed out that the transfer complied with the provisions of the Law of Penal Execution and Supervision, which states that a prisoner may be immediately transferred to another prison when there is an imminent risk to his or her life.  In this sense, the transfer took place in order to protect the life of the former de facto president.

Around 1:00 a.m. on Saturday, the former senator was transferred to the Miraflores prison, where she will be held with all the necessary conditions for her medical attention.

In response to the media campaign in favor of Jeanine Áñez, the media reported that the Government transferred the former de facto president in an ambulance under false pretenses.  The evidence presented by the Bolivian Ministry of Government dismantles the story of the defense and the right-wing media that indicated that the transfer had been carried out without Áñez's knowledge.

Jeanine Áñez is being investigated for the alleged commission of sedition, terrorism and conspiracy during the coup d'état that left 36 people dead, 804 wounded and thousands persecuted, tortured and humiliated.