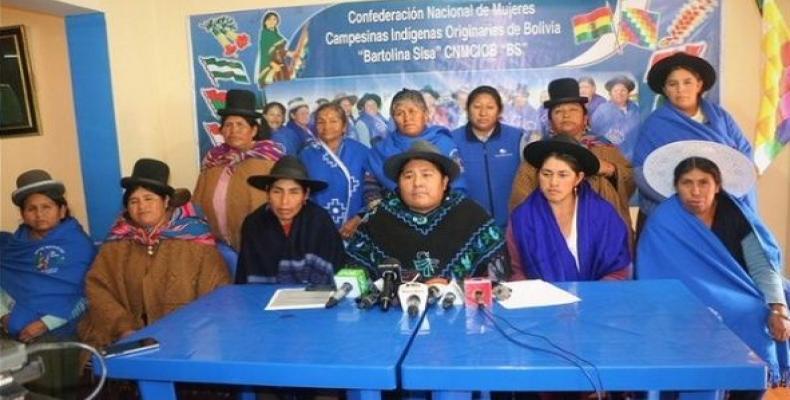 According to Confederation Bartolina Sisa’s leader Irisolda Ribero, the government has not complied with promises and strategies in combatting the virus.  As Ribero explains, the de facto president assured food delivery, supplies and economic help for the poorest, but aid has not reached the Bolivian people.

"The need because of hunger causes many of us to take to the streets in search of a solution and we ask that the current de facto government be concerned about this situation in which many Bolivians live” the indigenous leader expressed.

Ribero also pointed out that the Añez regime is conveniently stating: “It is not fair that they politicize the situation regarding the coronavirus because they are saying that the previous government, the MAS, is paying the protesters to generate trouble and break the quarantine.  That is a lie.  If we go to the streets it's because we do not have food to feed our children and the only thing we are asking is that these needs must be prioritized," he said.

Bartolina Sisa Federation of Women Farmers or as the "Bartolinas" is an organization of Bolivian women and the first organization of rural women in South America.  It is named after the Aymara heroine Bartolina Sisa.  This organization's purpose is to empower rural and indigenous women and to ensure their active participation as political decision-makers in their communities.