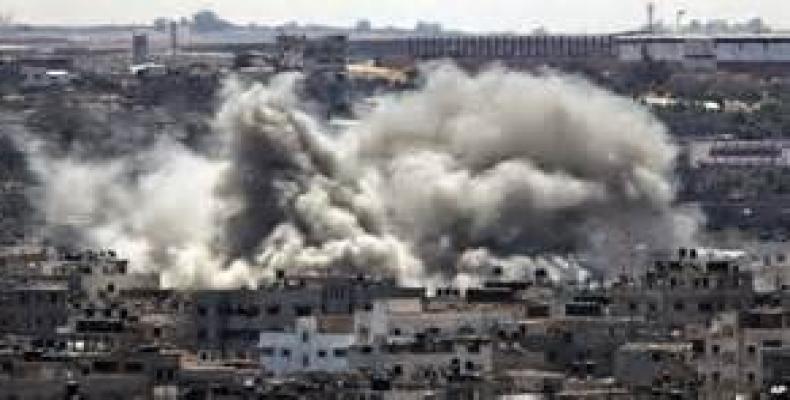 Ramallah, November 28 (RHC)-- The Israeli military has conducted fresh air strikes on the Gaza Strip after Palestinians in the blockaded enclave and the occupied West Bank marked a “Day of Rage” in protest against Washington's contentious declaration of support for the regime’s land grab policy.

The Israeli military said its fighter jets had hit a number of targets belonging to the Hamas resistance movement in southern Gaza late Tuesday night and early Wednesday, including one site “for the production of arms.”   According to the Israeli military, "the strikes were carried out in response to the rockets that were fired from the Strip toward” the occupied territories.

An Israeli army spokesperson claimed that two rockets were fired from Gaza on Tuesday.  He added that sirens went off in Ashkelon in the aftermath of the rocket fire, sending tens of thousands of residents into shelters.

Prior to the air raids, Prime Minister Benjamin Netanyahu warned Gaza-based resistance groups against firing rockets into Israel.  “If someone in Gaza thinks it’s safe to attack us after Operation Black Belt — they’re making a serious mistake.  We will respond aggressively to any attack against us,” he said, referring to the intense fighting between the Israeli army and the Palestinian resistance movement Islamic Jihad earlier this month.

On November 12-13, the two sides engaged in a fight after Israel assassinated senior Islamic Jihad commander Baha Abu al-Ata, along with his wife, in a targeted strike on their home in Gaza.  During the flare-up -- which killed a total of 35 Palestinians -- Tel Aviv conducted dozens of airstrikes on Gaza, while Palestinian resistance fighters fired over 450 rockets and mortar shells into the occupied territories.

The Israeli raids followed heavy clashes earlier on Tuesday between Israeli forces and Palestinian protesters during the “day of rage” rallies that were prompted by Washington’s U-turn on the Tel Aviv regime’s settlement expansion policy.

Thousands of Palestinians demonstrated across the West Bank and Gaza earlier on Tuesday to condemn US Secretary of State Mike Pompeo’s announcement that the establishment of Israeli settlements in the occupied West Bank “is not per se inconsistent with international law.”

In Gaza City, hundreds of Palestinian protesters gathered outside the offices of the United Nations to express their anger.  According to the Palestinian Red Crescent, at least 77 protesters sustained injuries during the clashes with Israeli forces, ranging from tear gas inhalation to rubber-coated bullet wounds.

In the northern West Bank city of Nablus, Palestinian protesters burned US and Israeli flags as well as cardboard cutouts of Israeli Prime Minister Benjamin Netanyahu, US President Donald Trump and Pompeo.

The Palestinian Authority's governor of Nablus, Ibrahim Ramadan, said during one of the rallies that “popular resistance is the real response to the unjust policies of the U.S. administration against the Palestinian people and to Israeli crimes.”

In the central city of Ramallah, demonstrators held signs reading, “Trump to impeachment, Netanyahu to jail, the occupation will go and we will remain on our land.”   Several senior Palestinian officials, including Prime Minister Mohammad Shtayyeh, deputy chairman of the Fatah party Mahmoud Aloul participated at the Ramallah protest.

Addressing the demonstrators, Shtayyeh stressed that Tuesday’s “day of rage” was aimed at expressing Palestinians’ “rejection of Israeli occupation” and the policies of the Trump administration.

In the city of Bethlehem, south of Jerusalem al-Quds, protesters marched on the streets, carrying a poster reading, “Palestine, from the [Jordan] river to the [Mediterranean] sea.  Palestine is ours; Jerusalem is our capital.”