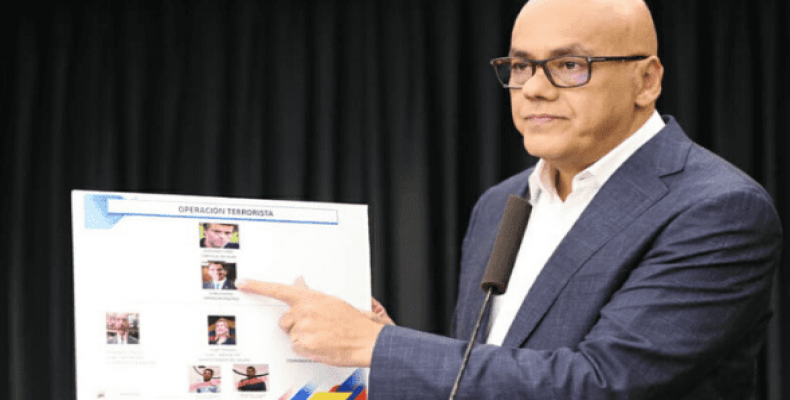 Caracas, December 15 (RHC)-- Venezuelan Communications Minister Jorge Rodriguez has revealed details of a terrorist operation that was intended to be carried out against the Gran Mariscal Sucre Headquarters and the Zonal Command No. 53 of the Bolivarian National Guard in the state of Sucre.

This operation was undertaken by members of the right-wing party, ‘Voluntad Popular,’ led by Leopoldo Lopez and Juan Guaido, and organized by the deputies of the National Assembly of Venezuela, Janet Fermin and Fernando Orozco.  "After a terrorist operation, Leopoldo Lopez and Juan Guaido wanted to enter weapons from Colombian territory to storm Venezuelan military bases," Rodriguez denounced.

From the press room Simon Bolivar in the Palace of Miraflores, the communications minister presented evidence of the terrorist plan that sought a "bloodbath" in at least the state of Sucre with different acts of aggression and which would be assisted by several armed groups.

Rodriguez said opposition deputy Fernando Orozco held several meetings with members of the police in the state of Sucre with the intention of recruiting them to carry out the operation, including Sixto Salamanca, alias Soublette 9 and Jose Miguel Yegüez, alias Cazador.  They are currently in detention and their testimonies reveal the details and those involved in the failed act.

He pointed out that on December 5 and 10, two meetings were held where Orozco, Fermin and Salamanca participated, in which the order issued by Guaido was given for this operation to take place in Sucre and would also take place in the state of Barinas.

“Orozco said in a video that if some guards or army personnel are killed, they will generate a skirmish to cover up the rotten pot of corruption and embezzlement of all the denunciations that are made. Orozco's solution to this scenario is to take two barracks, kill people and thus end Christmas, erasing the corruption scandal in which Juan Guaido is submerged,” Venezuelan minister explained.

Rodriguez also showed several videos where deputy Fernando Orozco indicated that they had weapons to execute the operation and that the financing came from Colombia and should be managed by Guaido but the order was given by the deputy Fermin, who is being denounced for being involved in these terrorist actions.

In conclusion, Rodriguez said that "fortunately we prevented it and we will continue to prevent actions that threaten the peace of the Republic" and added that "the Venezuelan people are at peace, sharing as a family this Christmas season, so since "the national Government does not destabilizing actions will be allowed.”