Venezuelan president says military is committed and loyal to Revolution 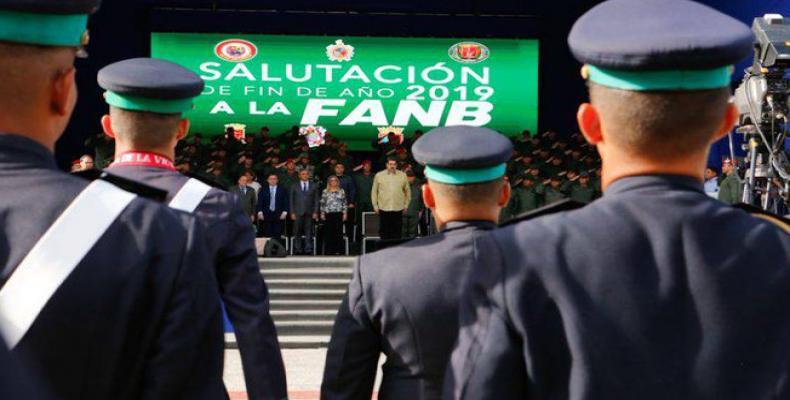 Caracas, December 28 (RHC)-- Venezuelan President Nicolas Maduro presided over the year-end activity to honor the Bolivarian National Armed Forces (FANB), where he highlighted the loyalty and commitment of the military in defense of the country’s sovereignty and peace.

Maduro said: "Today I am more optimistic than ever about the future of our nation and more grateful than ever for the loyalty, professionalism and cohesion of the Bolivarian National Armed Forces."

During his speech, the Venezuelan president also referred to the events that occurred during this year as the tightening of the economic blockade and the imposition of an interim "president" in Venezuela by the United States.

"The Armed Forces reacted to the attacks as a whole, with a slogan that was imposed in this 2019 and assumed by the entire nation: Loyal always, traitors never!" he added.

"We suffered an international conspiracy whose objective was to divide, fracture and destroy the unity, discipline, cohesion and morals of our military forces (...) it is a multiform aggression accompanied by threats of invasion, attempts at bribery, corruption and a structured psychological war so that our military forces would surrender without fighting," the Venezuelan president highlighted.

Maduro recalled the events of last February 23rd, where the right-wing -- supported by the White House and the Government of Colombia -- sought to enter the country with alleged humanitarian aid and incite violence on the border with Colombia to promote a coup d'etat.

"From the Palace of Nariño and from that traitor named Ivan Duque, is where all the conspiracies have been planned to try to destabilize the country and impose a coup d'etat," he denounced.

The Venezuelan president also reiterated that all the aggressions of international factors wanted the armed forces "to doubt their historical and constitutional role," however, they met with the "conscience of steel, an indestructible moral that came to pulverize all forms of psychological wars and conspiracies of 2019."

In the "blood of the military, there is a rebellious will that goes back generations and that has allowed us to defend ourselves against any conspiracy and attempts at division," the head of state emphasized.