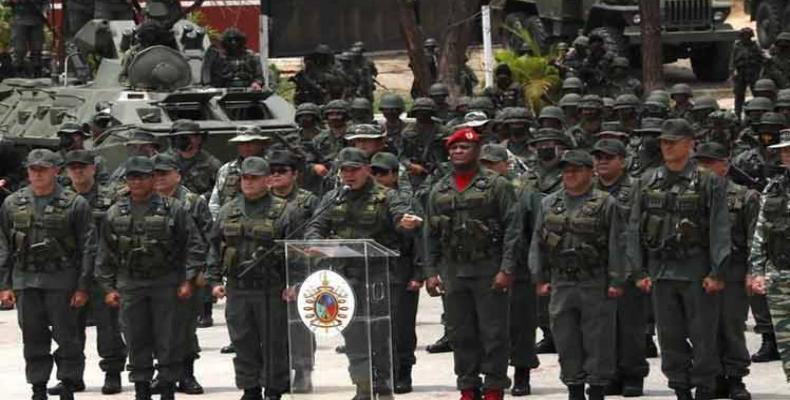 Caracas, May 4 (RHC)-- The Bolivarian National Armed Force (FANB) of Venezuela repudiated the attempted violation of the country's maritime sovereignty and expressed its support for President Nicolas Maduro.

"The Bolivarian National Armed Force categorically rejects these acts of irrational violence before which we have always been victorious in the defense of the homeland (...) we reiterate absolute loyalty to Nicolás Maduro Moros, constitutional president of the Bolivarian Republic of Venezuela, our Commander in Chief," said Defense Minister Vladimir Padrino López, while reading a statement issued by the country's military corps.

The minister stressed that the maritime incursion was intended to be land-based with the aim of distributing a group of mercenaries throughout various regions of the country, to foment violence and kill political leaders to provoke a coup d'état.

The military forces, said General Padrino López, which are distributed throughout Venezuela, remain on full alert against the United States and ready to repel any new attempt at action against political leaders and state institutions.

"The mercenaries do not have a soul, they are cowards, because the heads of this operation, who send these young men as cannon fodder, are part of the cowardice they have always shown to break our democracy.  We declare ourselves in permanent rebellion against the American empire," said Padrino López.

In addition, he said that President Maduro has ordered a second phase of the military exercise Bolivarian Shield and detailed that in the next few hours they will be distributed throughout the national territory, emphasizing the entire coastal region and carrying out air, sea and land searches "to detect any other element that wants to enter to destabilize the nation."