Evo Morales and Rafael Correa disqualified from participating in elections 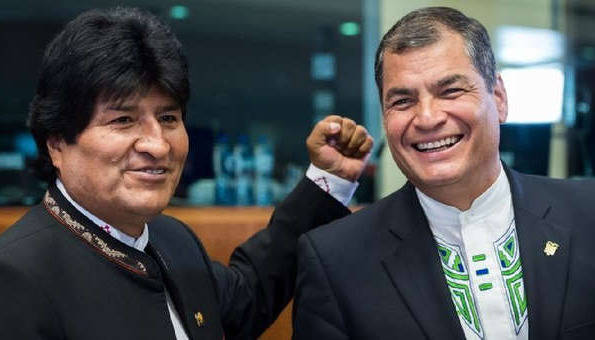 Caracas, September 8 (RHC)-- The judicial decisions that disqualified the electoral candidacies of the former presidents of Bolivia, Evo Morales, and Ecuador, Rafael Correa, were criticized by political leaders in the region, who considered them a blow to democracy.

In a message posted on the social network Twitter, the recently created Simon Bolivar Institute for Peace and Solidarity among Peoples (ISB) stated that "the Latin American right has articulated measures that violate the political rights of both leaders."

The statement said that "they prevent the peoples of Bolivia and Ecuador from freely exercising their will.  Sad day for democracy."   The ISB gathers leaders from the political, intellectual, academic and social movements of different regions.

On Monday, Judge Alfredo Jaimes Terrazas, of the Third Constitutional Chamber of Bolivia, determined that former President Morales is disqualified from running as a candidate for the Senate for the department of Cochabamba by the Movement Towards Socialism (MAS), in the elections of next October 18, due to the fact that he does not currently reside in Bolivia.

On the same day, a court of cassation of the National Court of Justice (CNJ) of Ecuador issued a ruling that definitively nullifies the possibility of the candidacy of former President Rafael Correa for the vice presidency of the country for the Citizen's Revolution movement.

The President of Venezuela, Nicolás Maduro, in a message published on his Twitter account, expressed: "Brother Evo!  The fascists know that you have the majority support of the Bolivian people, that is why they are preventing your candidacy for the Senate.  They will not be able to stop the strength of a people that has awakened from centuries of oppression and is determined to be free.  Long live Bolivia!"

In another tweet, the Venezuelan head of state declared that "the traitors are afraid of the will of the Ecuadorian people, which is why they have taken the desperate measure of preventing brother Rafael Correa from participating in the presidential elections. Sooner rather than later, there will be justice."