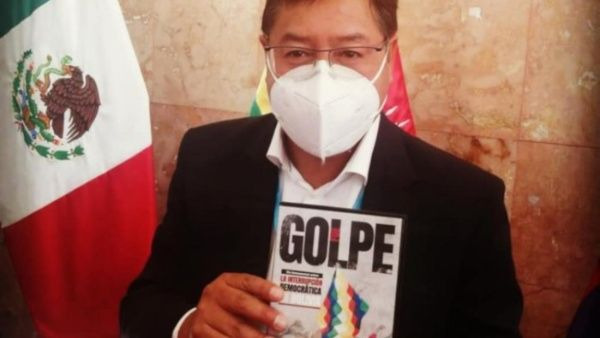 Bolivian President Luis Arce received a copy of the documentary during his recent visit to Mexico. | Photo: @FueGolpe

La Paz, April 12 (RHC)-- Former Bolivian President Evo Morales transmitted on Sunday on his FaceBook page a documentary that unveils details of the coup against him in November 2019, which led to his exile, first in Mexico and then in Argentina.

In a message posted on his Facebook page, Evo Morales explained that "Fue Golpe" ("It was a Coup") is "a self-produced and independent documentary and a tribute to the Bolivian people and their struggle to recover democracy."

The work shows how the coup took place in Bolivia in November 2019, with the participation of the Organization of American States (OAS).  Evo said that the documentary was directed by Bolivian filmmaker María Fernanda Rada and produced with Luis Bolívar and Alina Duarte.

The work "has a team of journalists, activists and independent artists, whose work will remain as a historical document for future generations," said the former Bolivian president.

After a year in exile, Evo Morales returned to Bolivia in November 2020, following the electoral triumph of the Movement Towards Socialism (MAS), which brought current president Luis Arce to power.